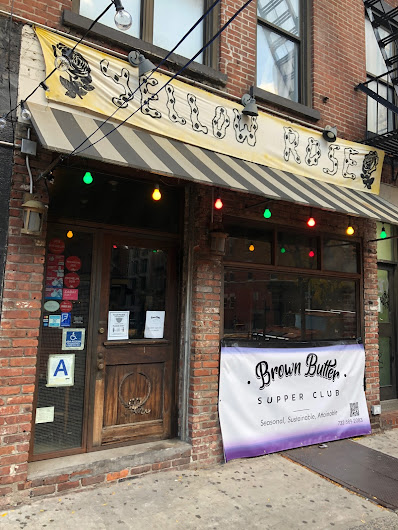 It's with bittersweet news that we're officially announcing the closing of our doors here at Feast. We've shared incredible memories and irreplaceable friendships with staff and guests alike. And for those reasons alone, we are eternally grateful.

In the spring of 2014, the restaurant made international news ... when a patron at Feast was asked to remove her Google Glass headset before dining. The diner, the organizer of a Google Glass user group, refused to do so, and left the restaurant.
She wrote about the incident on Google +. Shortly afterwards, 13 one-star reviews of Feast appeared on Google from people who commented on the diner's post. The negative reviews were not based on the restaurant's food, but rather the no-Glass policy. (You can relive the memories here!)

Moving forward, the space already has a tenant. In recent weeks Feast has hosted a pop-up collaboration with Yellow Rose, a Tex-Mex-style eatery. Starting on Wednesday, Yellow Rose will be here full-time.

Per the Infatuation: "Expect a menu of a bunch of delicious tacos, spicy hominy soup with long fideo noodles, micheladas, and desserts."

Four years ago, Dave and Krystiana Rizo moved to New York by way of San Antonio. Soon, Dave was cooking at Superiority Burger, while Krystiana managed and bartended at the East Village location of Emmy Squared just a few blocks away. But even as the couple was diving into the New York food scene, they craved the cooking from back home.