Reader reports: Package theft season is upon us 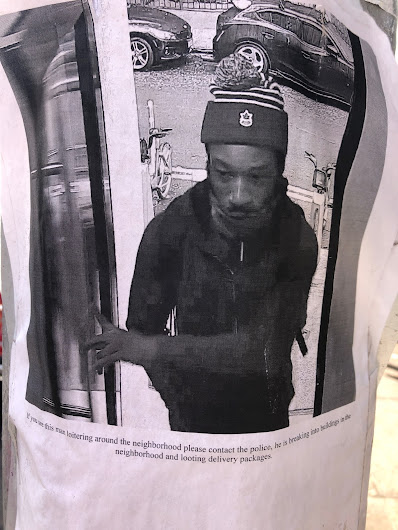 We're hearing from several readers about a rash of package thefts of late — even with more people working from home and being there for a delivery.

For instance, someone placed the above flyers along Avenue B showing a video-surveillance pic of an alleged thief residents say is "looting delivery packages" at several EV buildings.

One reader shares the text of a flyer from a building along Seventh Street:

I had 2 Amazon boxes opened and contents stolen yesterday. (In fact, all boxes in the lobby were opened, some with unwanted contents left on top of the boxes.)

My Amazon delivery notice stated, "Your package was delivered. It was handed directly to a resident." (Never seen that on a delivery notice.) That "resident" was not me. I never even spoke to Amazon.

So either we have a thief in the building or, more likely, some fool buzzed in someone they did not know, who stole our stuff.
Whoever stole the contents of these packages opened them in the lobby. Did no one hear?Please watch out for your neighbors. If you are feeling particularly kind, consider dropping the package at their door on the way up to your apt.
Otherwise, only buzz in people you know.

Amazon has been taking photos of the package as they deliver them so the delivery person can cover their arse if it goes missing. That said, I've had good luck with Amazon and other mail-order companies replacing my packages when I tell them it was stolen. I think this happens so often now, they don't even ask questions.

This sucks, though. Never buzz anyone in you don't know, and if you do get a package, go get it right away.

I suggest leaving a BIG sign on your front door asking mailman/delivery people/neighbors not to let ANYONE in behind them. This is how a lot of them get in, they just piggyback someone else getting buzzed in. I don't expect a Door Dash guy to block anyone else getting in after them, but it certainly makes the thief think twice before they try to sneak in, and sometimes that's the difference between them hitting your building or the one across the street.

This almost makes me miss waiting on those hour long lines at the Post Office for packages they could never seem to find.

@5:19 - that's not always possible, especially with medical supplies. Or, when the store you used to shop at is now out of business.

There was an article in the Times that said 90,000 packages disappear daily in the city.

Partially to blame is delivery companies, they do not buzz apts. Yesterday i stayed home for a package from USPS,No delivery, this morning got it, was sitting in hallway even though i was home. I understand delivery people do not want to be in contact because of covid. But at least buzz if leaving packages in hallways. Best to do is track package by email, 20 mins after i got package i was alerted by USPS through Email and a text.At least even though 20 mins later i was notified, so that only gave that 20 mins for it to be stolen

That's my note above, re E 7th Street. Amazon taking photo of packages stacked on a lobby floor does not prove that they were delivered to the customer, but merely left. They need to go back to getting signatures, or allowing customers to have the option of requesting that a signature is required to assure delivery. I asked Amazon about this, and they told me they can't do that. I asked them to make the delivery person aware that the packages are being stolen; they instead offered to submit the theft as "feedback." As brutal as the Big Brother system is at Amazon warehouses, you'd think it'd be the same on the delivery side of things. I got a refund and was told to reorder, but this time I hope to have the boxes delivered to the dry cleaner next door.

Or you can have it delivered to Amazon lockers throughout the city. It's free

The innovation over here is a guy in an orange vest with reflective tape and a big shoulder bag -- so he looks like an actual delivery guy -- buzzing every apartment until someone lets him in, then stealing whatever packages are in the lobby.

This was a big problem in our building at Village View. We actually put up a sign asking USPS and other delivery services to drop packages at tenant's doors. It's a pain, b/c they have to work their way down each floor, but it's safer than leaving a pile of packages visible through the window from the sidewalk on 1 Ave.

For those who don't want or can't afford to rent a mailbox at one of the local package-receiving places, it seems most of them will receive a single expected package for a small fee.

I rent a mailbox so I can use the address for package deliveries; to my knowledge, the only one I've had stolen from my lobby was a surprise gift from an old friend a few years ago.

And I deliver whatever packages I can to tenants on upper floors, although with the seasonal glut just beginning, I'm glad to see others also do this.

There was a guy on our block last year carrying a big duffel bag and ringing buzzers building after building trying to get in. He wasn't even trying to hide what he was doing.

I have a deal with my mail person; if he has a package for me and I'm not home, he leaves a notice in my mailbox and I pick it up the next day at the post. And I use Amazon lockers as long as the package can fit.