The Bean ready to make its 2nd Avenue return 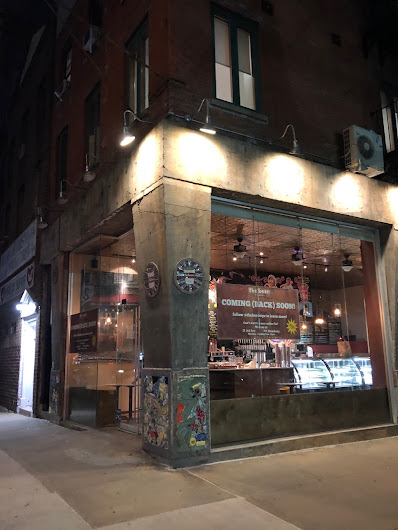 The Bean reopens today in its former home on Second Avenue at Third Street... almost a year to the date that it closed at this very location.

As you may recall, the Bean shut down two EV locations in November 2019 — here on Second Avenue and on First Avenue at Ninth Street. At the time, owner Ike Escava blamed rising costs on the closures. The outposts on Third Avenue at Stuyvesant and Broadway at Ninth Street remained in operation.

The Bean first debuted in December 2011 here on Second Avenue. The retail space has been vacant since the Bean's departure.
Will update the post when we get the new hours for this Bean branch.
Previously on EV Grieve:
• The Bean is returning to its former home on 2nd Avenue
Posted by Grieve at 5:22 AM

I'm eager to read details: surely there must be lessons for small-business and landlords alike in a deal that brought a tenant back after a year's absence. Who gave what? Anything that either side could have avoided or done differently in the first place? How expensive is a reopening vs. opening? Show the Journal how it's done, Grieve!

"The Bean first debuted in December 2011 here on Second Avenue" - Didn't they start across the street, on 2nd Ave's west side, and were replaced there by a Starbucks, before moving to this location?

Yeah, this is an odd story, also curious.

The Bean is back where it belongs!

the plot thickens---score one for the good guys....

They were originally on First Ave and 3rd St. The greedy landlord bowed to Starbucks and terminated their lease.