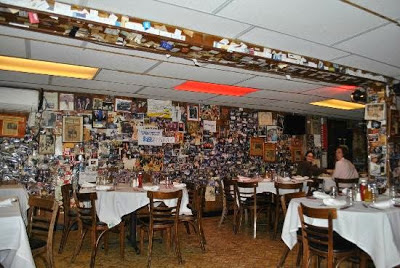 Word circulated this weekend that LES staple Sammy's Roumanian Steakhouse had closed for good on Chrystie Street after 47 years of serving up ice-encased vodka, smeared pitchers of schmaltz and enormous platters of meat to the backdrop of Yiddish sing-alongs.
This afternoon, Sammy's ownership (David Zimmerman) responded to the rumors in an Instagram post. (East Village-based storefront photographers James and Karla Murray initially observed what appeared to be a closure.)

It is with great sadness that we announce that the rumors are true and we have had to shut the doors to the infamous basement.
Sammy’s Roumanian is more than just a restaurant. It's a community. A celebration of tradition. An experience difficult to put into words. It's where families come to dine weekly, where partygoers begin their night (if they survive the frozen vodka), and where Simchas are celebrated. It's a place where you can be yourself, make friends, discover what a Shiksa is, and maybe even get called out as one too. Above all, it's a place where everyone feels at home, welcome, and part of a larger family.

However, it sounds as if Sammy's is leaving the door open for a return some day in a new location.

So chins up fellow schmaltzers. All the years of devouring chopped liver with our special schmaltz, schmered on rye bread with a side of pickles and a shot (or glass) of frozen vodka to wash it down will be remembered fondly. We may be closed now, but when all this is over and we feel safe enough to hold hands during the hora, we will be back stronger, louder, and tastier than ever before. We are New York. We will survive this. We will always cherish the memories we shared with all of you.

He confirmed as much in a text message to Gothamist.

Sammy's had closed when the PAUSE went effect last March, and was never able to reopen. And this is not the kind of food that works for delivery.
Posted by Grieve at 5:21 PM

The loss of an Institution been here a few times over thirty years. It offered something different it survived the bad days of the eighties only to fall now to a virus.