Retail space on the market at 20 St. Mark's Place 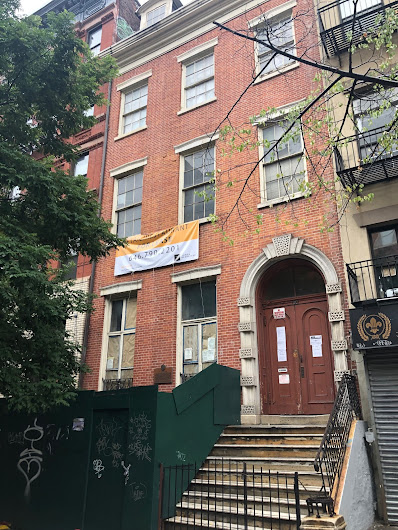 A new retail-restaurant for lease banner hangs on 20 St. Mark's Place between Second Avenue and Third Avenue.
We've been wondering what might be happening with this landmarked building. Hard to believe that the Grassroots Tavern has been gone this long already, closing after service on New Year’s Eve 2017... ending a 42-year run in the lower space. The upstairs retail tenant, Sounds, shut down in October 2015.
As noted many times before, No. 20, known as the Daniel LeRoy House, was built in 1832. It received landmark status in 1971 and was added to the National Register of Historic Places in 1982.

Applicants for Ichibantei had been on the CB3-SLA agenda multiple times dating to November 2018 for a liquor license for a new restaurant in the former Sounds storefront. There was speculation that they were also taking the GR space.
And in recent years, we've seen some extensive gut renovations occurring inside the former Grassroots, where some pretty cool murals were uncovered from a previous business life.
Meanwhile, the new retail listing for No. 20 isn't online just yet.
Previously on EV Grieve:
• New owner lined up for the Grassroots Tavern on St. Mark's Place

• Behold these murals uncovered behind the bar at the former Grassroots Tavern on St. Mark's Place
Posted by Grieve at 5:17 AM