A reminder to keep Two Bridge's Diner in your dining plans 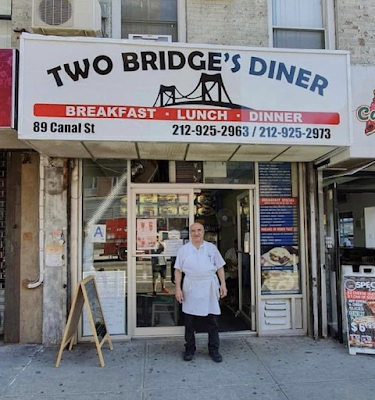 Several LES residents (and EVG diner aficionados) are spreading the word to keep Two Bridge's Diner on Canal Street in your dining plans.
Teddy Vasilopoulos, whose family has operated diners down here dating to the early 1970s (Landmark Diner, Cup & Saucer, Everest Diner), is currently on the injured list.
The folks at the family-run tofu shop Fong On shared this via Instagram:

He’s currently ... recovering from an accident when he was pinned by his own food truck outside of Two Bridges.

Now his brother is helping and covering for him until he gets better, which maybe a while. So please go support his business so that he’s got something to come back to.

This diner is actually more of a lunch counter but it is truly quite good. Chicken Parm over spaghetti and turkey club sandwiches are some of the highlights on the menu for shore