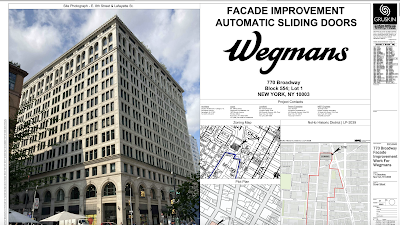 The buildout for Wegmans at 770 Broadway on Astor Place has entered a new phase.
Today, reps for the grocer will appear virtually in a public hearing before the Landmarks Preservation Commission about a façade improvement at the landmarked building. (Thanks to Upper West Sider for the tip!)
Wegmans plans to ad automatic sliding doors — similar to the ones you'd find across the way at CVS or at Whole Foods on Union Square — to what will be a new entrance on Fourth Avenue.
Sliding-door fans can check out the detailed proposal here. (That link also includes info about the Zoom call.)
Receiving approval for sliding-glass doors might be one reason that this Wegmans outpost isn't scheduled to open until the second half of 2023.
As previously reported, Wegmans signed a 30-year lease last July for what will be the grocer's first Manhattan outpost.
Kmart closed in this space after 25 years on July 11. Wegmans had agreed to buy out Kmart's lease to make this deal possible.
Previously on EV Grieve:
• Astor Place Wegmans watch, work-permit edition
Posted by Grieve at 4:50 AM

I want Aldi to come down here too. Shopped at them in Germany, they are amazing, the food is high quality and the prices are mindbogglingly cheap.

Yes, it would be great to have an Aldi in our area! I love the one in east Harlem, but it's such a schlep to get there.

I love Wegmans ! Aldi's is cheap but nowhere near the quality of Wesgmans.

I can do without an Aldi's...A low-rent version of Trader Joe's (same family in Germany)

It is absurd how long it takes to get these approvals.

They have the in the suburbs outside the city. Their prices are extremely low relative to Whole Foods and even Trader Joe’s and quality is outstanding not super fancy. I doubt that they will ever be allowed in nyc because they would destroy their competition.

I doubt they’ll ever be in NYC because the rent is too damn high.

There IS an Aldi's in Manhattan (and it's been here for many years). I've shopped there.

There's an Aldi in a the big Costco/Target mall in East Harlem.

Speaking of grocery stores, I have not heard anything new about the grocer that was going into the old Associated space on 14th Street in quite a long while.

Does anyone know if that's still happening?

Have been wondering about that myself... I haven't been over there during the day in a while ... someone who lives in StuyTown told me he has seen activity inside the space...