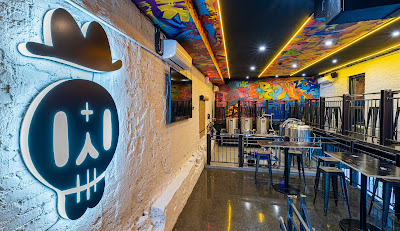 Top photo by Jason Greenspan
The Bronx Brewery East Village opens tomorrow at 64 Second Ave. between Third Street and Fourth Street. (First announced in March 2020.)
A rep for this outpost of the Bronx Brewery, which opened in 2011, shared this info about the multi-level EV location:

[T]he space’s focal point is the pilot brewery system, a fully-functional brewery in the center of the seating area that will be used to expand their popular Y-Series ... limited-release, often experimental beers brewed in collaboration with creatives ranging from activists and musicians to artists and entrepreneurs.

The series will continue to provide a platform to celebrate and spotlight the community, contribute to charitable organizations and support the diversity of the city. Past Y-Series collaborations have benefited organizations like SapnaNYC (serving low-income immigrant South Asian women), the Humane Society, community gardens and Callen-Lorde (providing healthcare services for the LGBTQ community). The Y-Series beer roster for the new location is currently being developed and will prioritize local East Village/LES talent, including local artist ClockWork Cros and Mikey Likes It.

The space features corrugated steel accents and exposed i-beams, a nod to the industrial setting of the original Bronx location ...  A concrete-topped bar with perforated metal sheeting anchors the front taproom area, with neon lights in the design of the NYC subway map overhead.

The back seating area is on a catwalk overlooking the pilot brewery system; guests can watch beer being brewed in real time as they eat and drink, taking in the sounds and smells of the brewhouse and cellar hop additions. 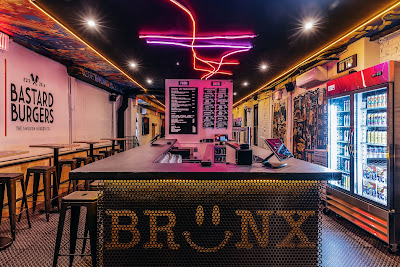 Aside from the 14 beers on tap, the Bronx Brewery East Village will also feature the first U.S. location for the Swedish brand Bastard Burgers. (The food will be available for delivery a few weeks after the launch.) You can find the BB menu here.
The Brewery's hours of operation: 5-11 p.m. Mondays through Thursdays with a midnight close on Fridays; noon to midnight on Saturdays and noon to 9 p.m. on Sundays. Find more info on this location at this link.
No. 64's retail space has been vacant since NYC Velo moved next door to No. 66 in the spring of 2016.
Second interior pic by Charlie Bennet
Posted by Grieve at 5:30 AM

Woo! party, booze, beer, city never sleeps nor will those who live nearby as the neighborhood turns into the official party place with its own nightlife mayor.

It's brewery with 11pm closing hours during the week, move the suburbs if you want to sleep beforehand. This NIMBY mentality will kill everything.

This is frankly an awesome addition to the neighborhood.

Some people will never be happy.

excited to check this place out!

"as the neighborhood turns into the official party place"

That being said if the food is really good, they focus on beer quality as opposed to being a Bro sports/TV dump, and if they do not promote SantaCon, it could be a real asset to the EV like Zum Schneider was. Their "private events" and "art & music from its Up and Comers creative series" option IMO is a real concern. We shall see. BTW, does anyone have any experience with their Bronx location?

The infamous "move to" line. Usually (but not always) used by some recent transient who came from suburbia, ironically, to live here. This is a junk response that has been noted many times here at the EV Grieve blog and has been mocked accordingly. Coming soon:

Gotta Agree with DL here... This is second ave... even before NYU crossed the DMZ, this was packed with late night people. This place won't change that. What it will change is it'll give us in the area a cool new spot.

I hope it does really well!

I know that I'll go there and I'm really looking forward to it!

They don't get it. This place closes at 11pm and midnight on weekends. NYC is no longer the city that never sleeps. Soon they will end 24 hr subway service. It won't be necessary when everything is closed by midnight. They can shut down from 1am to 4 or 5am for actual cleaning. And no more tourism. That article about NYC is dead was correct. It's just a slow painful death over time. Tourists from England for example aren't coming here to wear masks, show papers, and be in their hotel by 11pm because everything is closed.

Completely agree DL. People on here complain about everything new coming into the neighborhood

A wonderful addition to the neighborhood!

There's a lot of ASSuming going on that this place will be some sort of nightmare.

This is an 11-year old NY business that is expanding ever so slightly - nothing mega, nothing out of step with the neighborhood. It's hours reflect the demands of the CB - closing early ('early' is subjective, but it's a bar closing at midnight on the weekends).

I welcome them to the neighborhood. Best of luck!

To all those woo wooing about another drinking establishment on a block that already has 8 establishments with liquor licenses, most with outside tables, I hope you too get to live on a street facing apartment on a formerly livable block like this one. This block used to have a decent quality of life even with the junkies and the homeless from the many shelters in the area. The building that houses the brewery is well known to the precinct and neighbors for packed roof parties with music that broadcasted throughout the neighborhood until early in the morning. The fire department showed up a few times because they set up electric heaters on the packed roof too. Between the roof parties, constant noise from Thursday through Sunday, crowded sidewalks and doorways filled with litter and vomit quality of life in this formerly residential neighborhood has gone way down. Never would I think that this EV block would become a Disneyesque drinking destination.

East Village had nightlife before we both were born.

For English tourists, any closing past 11 is a treat.

I coined "go back to Ohio" (formerly "go back to Iowa"), and I live here longer than most born New Yorkers.
And yes, he doesn't need to move to the suburbs, he can just go uptown.

NOTICE : As of Feb 4 NYC Dept of Health and Mental Hygiene has officially declared Bronx Brewery Derangement Syndrome a thing.

You live on a busy stretch of 2nd ave, how else do you expect any business to survive nowadays.

Agree that rooftop parties suck, which is a big issue throughout EV, but that's a separate thing altogether.

So perfectly framed, thanks for your response, it saved me the effort.

"I coined "go back to Ohio" (formerly "go back to Iowa"), and I live here longer than most born New Yorkers.
And yes, he doesn't need to move to the suburbs, he can just go uptown."

This is 10.27 AM and 10.35 AM. I went to Immaculate Conception and Stuyvesant High School when it was on 1st Ave and 15th St, born and raised here and I still live on East 14th Street so please. The "move to" line is never acceptable. You can illustrate your POV without it. EOS. As I noted "it could be a real asset to the EV like Zum Schneider was" and most likely it will be. BTW, my father used to hoist a few at Stanley's on Ave B and 12th and he would take me there during summer daylight hours after swimming at the Asser Levy pool when I was a kid where I would drink a coke at the table, watch the Yankee game on the one TV, and looked on with fascination at the spittoons that were in that bar so please again.

This place sounds awesome to me & I live around the corner. When was the EV famous for being quiet? We had the Hells' Angels on this block for, what, forty years? Quiet wasn't their style. I agree with the posters above ... as long as they don't participate in SantaCon, let's welcome them!

Lived here 30 years. This block was always noisy, with the outdoor seating.

Their beer is great. Can’t wait to sample the burgers. This is a great addition to my block. I love that they do charity events with local non profits. These people are New Yorkers, like me. I will support them. The puritanical regulars on here who always want to complain about anything new and fun and who rigidly insist on imposing their monk like values on the rest of should just pack up and go already. You are not in the majority and you never will be. I mean geez, this place closes at 11. Get a life.

I'm usually up for complaining about a new bar opening next to my apartment, but look at their business hours.even I can't complain about it. Save it for the 4am closings!