Today in mayoral visits to the East Village 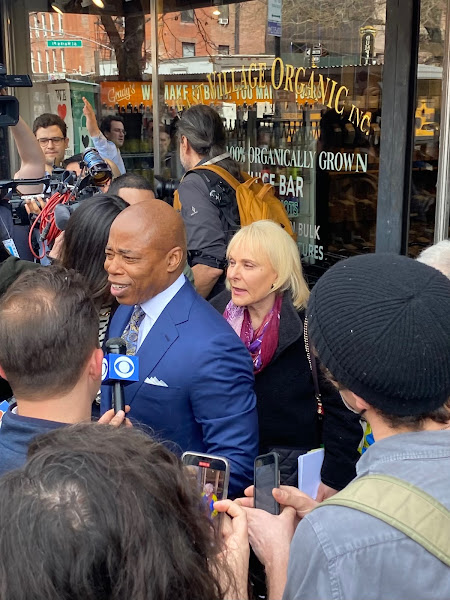 Photo at East Village Organic on 1st Avenue by Steven
Thanks to everyone for the emails, texts, cards and letters about Mayor Adams taking a walking tour of the East Village today... to announce that #NYCisBack ...

Hitting the streets in the East Village to spread the word: #NYCisBack! pic.twitter.com/q4gcq1MT8l

As previously reported, NYC's indoor vaccine mandate is gone starting today. Restaurants, bars, entertainment venues and gyms are no longer be required to check for proof of COVID-19 vaccination from customers. In addition, the mask ban for students has been lifted.
His tour included visiting with owners of several restaurants (Dallas BBQ, La Palapa, MáLà Project), eating lunch at Veselka and walking through Tompkins Square Park. 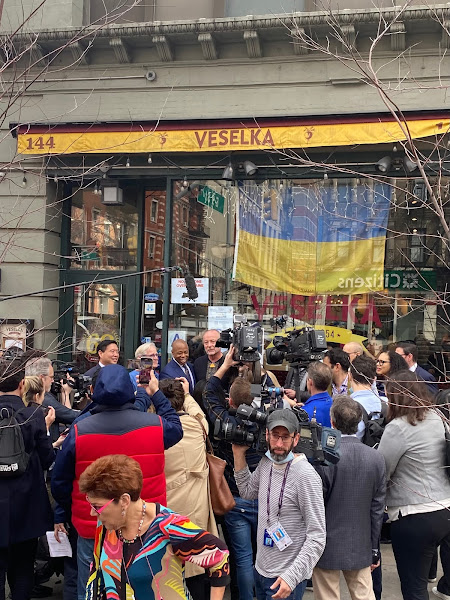 Updated 7 p.m.
There wasn't any shortage of the mayor's EV visit today... select news outlets include...
• CBS New York
• Curbed
• amNY
• NY1
Meanwhile, the mayor, who announced "new actions and investments in pedestrian safety at intersections" in January, was called out on Twitter for having one of his vehicles parked in the intersection on Second Avenue and Ninth Street this morning ...

In front of EVO! glad Ali's was one of Mayor Adams Stops Ali could give him a few pointers about fostering a community around a business that' not booze/tourist related in the east village

Ali would make a better mayor than Adams

He will be no different for the past two mayors, sadly. His ties to big developers will show how little he cares about housing for the non-rich.

He seems pretty cool to me. But he has to fire those people from Kansas that de Blasio hired who think plastic sticks and weird delayed traffic signals are good things. Those people don’t understand who NYers are. They think we’ll respect their ugly “delineators” (wtf?) and stand obediently waiting for a lightbulb to tell us when to cross the street. These are the people we left Kansas to get away from. We’re looking to Adams to tell those people to go away and, hopefully, never come back.

“NYC is back! Look at the skyrocketing rents, come celebrate!”

Who is funding all of his expensive suits?

Everyone is complaining Adams is a terrible mayor. But he is way better than Deblasio.

Meet the new Boss, same as the old Boss.

Men’s Warehouse. I guarantee it.

I voted for him, and so far, I am completely unimpressed. I see showboating and grandiosity ("My" city? Excuse me?) where I had hoped to see maturity and intelligence.

@12:02pm: I *didn't* vote for him b/c he seemed like smoke & mirrors to me then, and he hasn't done anything to change my opinion of him since he got inaugurated. IMO, you can't run NYC on "get out there & go to a restaurant".

Totally agree with you re: showboating & grandiosity. I fear for NYC, b/c we lost 8 years of possible progress under de Blasio, and we don't have another 4 years to waste.

Maybe that vehicle wouldn't block the crosswalk if the city didn't have a friggin corporate citibike station half block lengths and restaurants shacks in all the areas to pull over now. And I mean, it's the mayor, who cares, walk around it lol

And there's Carlina always ready for a photo op while avoiding important meetings having to do with the destruction of East River Park, SoHo NoHo rezoning or outdoor kiosks.