Why the Fillmore East commemorative plaque is missing on 2nd Avenue 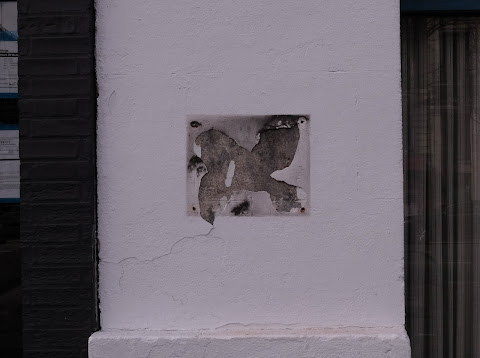 Photo by Derek Berg
Several observant EVG readers noted that the commemorative plaque outside the onetime home of the Fillmore East at 105 Second Ave. near Sixth Street is MIA.
A tipster thought it looked as if the plaque had been ripped off the wall here of current tenant Apple Bank.
However, Andrew Berman, executive director of Village Preservation, confirmed that the plaque had been damaged and is out for repairs.
The Greenwich Village Society for Historic Preservation (now Village Preservation) along with Two Boots placed the memorial here in the fall of 2014 to honor the venue that helped launch some of the biggest names in music from 1968 to 1971.
So while the plaque is at the shop, it's a good time to revisit some Fillmore East history ... in case you don't recall seeing the Grateful Dead, Love and the Allman Brothers on a bill here for $3. (When did shows get so expensive? I remember when they were $1!) 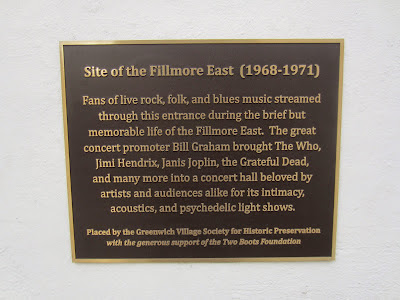 The sibling to Bill Graham's Fillmore West in San Francisco brought performers such as Led Zeppelin, the Doors, B.B. King, Roberta Flack, the Byrds, the Grateful Dead, Taj Mahal, Jefferson Airplane, Pink Floyd, Jimi Hendrix, Joan Baez and the Who to the East Village starting in March 1968.
No. 105 opened in 1926 as a Yiddish theater, soon becoming the Loew's Commodore movie house, followed by the Village Theater. In the 1980s, it was the nightclub The Saint, becoming Emigrant Bank in 1995 and then Apple Bank in 2013.
You can read about the history of the building and the 2,700-seat venue right here. And find a listing of every band who played the Fillmore East here. 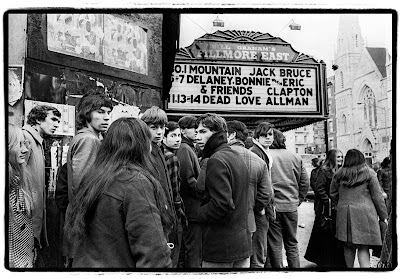 Archival photos courtesy of Amalie R. Rothschild.
Posted by Grieve at 5:05 AM

Ratners! A bunch of us struggling artists would go there to order something cheap and to devour the bread basket. Its waiters were a grouchy bunch.

I remember walking in on a Scott Muni broadcast from the stage of the Fillmore and then screaming like a little putz (I was in my teens) and interrupting his Broadcast and running out with my brother in-tow.

I was fortunate to see a lot of shows at the Fillmore. Originally, ticket prices were $3, $4, and $5. Second year they went up to $3.50, $4.50 and $5.50. My friends and I would head in from Jersey sometimes not knowing who was playing, but knowing it'd be a good lineup. Always was. Always three acts with short films during band setups. Good crowds having a grand time.

Actually you could have seen The Grateful Dead play for $1 at the Anderson Theatre which was locateda at 66 Second Avenue,...now the home of Velo Bicycles.

Great memories of the Dead, Quicksilver Messenger Service, and the
Airplane. And hearing Van Morrison as an opening act, not
knowing who he was.

So actually the last concert was in Dec 1974 when Bachman-Turner Overdrive played there under new management. It was called the New Fillmore East. Not sure why they couldn't make a go of it.

I remember wandering over from our apartments on E 12th. Past the Psychadelicatessen and Gems Spa. Tiny Tim, Cream, Buddy Miles, and many more. what a time.

I remember wandering over from our apartments on E 12th. Past the Psychadelicatessen and Gems Spa. Tiny Tim, Cream, Buddy Miles, and many more. what a time.

All kinds of jealous to have missed those great years of music and bohemia! And the Diggers' Free Store...we just had a different (and better, in my opinion), aesthetic at that time.

Great place for concerts. Miss everything about that time.

I was lucky enough to see a handful of concerts there (Grateful Dead, Elton John...) with the Joshua Light Show! I always wondered where the stage's "sweet spot" (downstage center) ended up and if the person(s) who lived in that space realized it or caught any "vibes" from the space where so many greats performed!