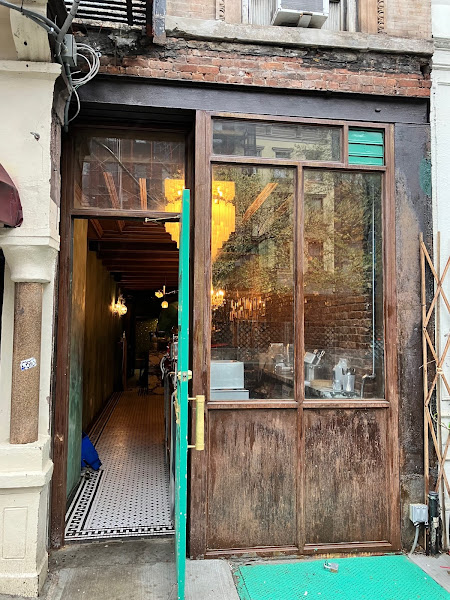 Lil' Frankies Grocery is now open at 21 First Ave. between First Street and Second Street.
This is East Village restaurateur Frank Prisinzano's personally curated grocery store, steps away from his Lil' Frankie's restaurant.
We first reported on this back in March 2021. Here's an excerpt from that post, based on a series of Instagram Stories by Prisinzano:

"I've always wanted to have a grocery store. I've always wanted to curate all my own products," said Prisinzano, who also owns and operates EV mainstays Frank on Second Avenue and Supper on Second Street. "It will be a curated list of products that I use and recommend. Nothing will be on the shelves that I don't personally love."
He plans on having a deli case inside the new shop to sell sandwiches ... with a vertical slicer for prosciutto. He's also thinking about offering homemade gelato and sorbet — similar to what his restaurants have on the dessert menus.
"I'm going to keep it real simple, real Italian and real fresh," he said.

Check out the grocery's Instagram account to look at the shop's sandwiches (breakfast sandwiches and tartines, too), sauces, meats and cheeses ... and coffee and espresso.
Lil' Frankie's is currently open from 11 a.m. to 4 p.m. Like his other establishments, it's cash only. (There's also a QR code scan/Apple Pay option.)
Posted by Grieve at 5:01 AM

If his grocery is as good as his Seared Salmon, and his Spaghetti Limone, then bring it on!

Good for for Frank but I have to give a shout out of support to the last of the old school, classic neighborhood Italian groceries, there for over a 100 years, Russo’s Mozzarella & Pasta on 11th Street. Excellent sandwiches, homemade pasta and so much more. Their prices are reasonable, the food is great, they accept food stamps so they serve all demographics, and were there throughout the pandemic. https://evgrieve.com/2020/03/a-visit-to-russos-mozzarella-pasta.html

OMG Russo's is an EV gem! Great pasta, sauce and bread not to mention the delicious prepared foods at a reasonable price. Long live Russo's but welcome to Li'l Frankies Groceries. We need these small specialty shops.

Russo's rocks. I ❤ them. I agree great food reasonably priced.