Easter Sunday at the Blarney Cove 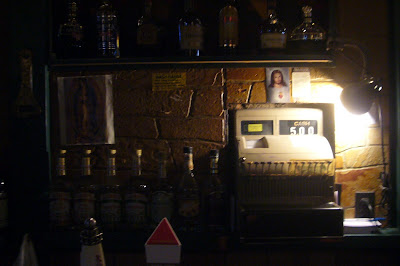 Who keeps playing the Joe Cocker on the jukebox? Like Kansas' "Dust in the Wind" is any better. Jimmy figures you can live to 100 by drinking and having sex. Maria says she doesn't drink or have sex anymore. But she has a short beer after her shift. Jimmy figures he has another 10 years. Or at least two years, he admits. The Yankees lose. Who's this closer for Kansas City anyway? He's quite good. Now it's John Denver and "Take Me Home, Country Roads" -- first the live version, then the studio recording. Can you skip the jukebox, or is that rude? Is the person in the green hoodie a man or a woman? (Doesn't anyone notice the sideburns?) Ah, Leonard Cohen. Squiggy is asking who won the NCAA men's basketball tournament. "North Carolina." Angel Cabrera wins the Masters! Who is he again? He's from Argentina, not Nicaragua. By the way, does anyone know that the heat is on in here?
Posted by Grieve at 6:28 AM

Thanks. I love the Blarney Cove.