So Bono, Michael Stipe, Natalie Portman, Kirsten Dunst, Jason Schwartzman, Spike Jonze and the Olsen twins walk into a bar on Avenue A... 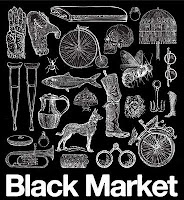 Over at Guest of a Guest, Billy Gray has a report on Black Market, punk veteran Jesse Malin's new nighspot at the former Pizza Shop. All those celebrity types showed up for some party. As Gray notes, "The wingding was in honor of fancy pants clothing line Rodarte and during Fashion Week, which inflated the guest list. But it bodes well for the Avenue A newcomer (and poorly for local peasants hoping to check it out for themselves). It also confirms that Malin has stealthily joined the roster of NYC nightlife heavyweights." Later in the post, Gray wonders:

What's a veteran East Village punk doing hosting a party for Rodarte? As another Fashion Week bites the dust and thankfully takes some star wattage with it, Black Market will hopefully relax into a solid, rock-tinged neighborhood joint. The sweaty, puke-stained ghost of CBGB would not abide another velvet rope.

I walked by Niagara earlier in the week and wondered why they had the velvet ropes out there.

This has all happened before and it will all happen again.

Malin already fucked up with that pretentious bullshit Cabin Down Below