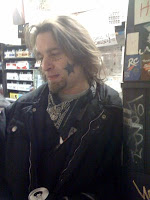 Bob Arihood has more information about the following item in the NYPD Daily Blotter from yesterday.... first, here is the item from the Post:

A thug seriously injured a man in a Greenwich Village apartment after they had met at a bar, authorities said yesterday.

After leaving the pub together, Joel Pakela, 40, escorted the victim to the apartment on Mercer Street at 5:20 a.m. last Thursday, cops said.

Inside, Pakela suddenly attacked the man, hitting him repeatedly in the face and breaking his orbital bone, sources said.

He was charged with assault and resisting arrest, said a spokesman for DA Cyrus Vance Jr.

As Bob noted: "It seems that an East Village personality that we all know , the infamous L.E.S Jewels ( a.k.a. Joel Pakela) is going to be doing some time." (Read Bob's full post here.)

GOOD! He isn't likable, romantic, redeemable. Sweep him upstate for a few beating and butt exploratories and maybe he'll stop hassling people himself. Tough freaking love on this "notorious" schmuck

Thank you, anonymous coward. I have known Joel for nearly 20 years and although it saddens me to see the depths he has sunk to, I know he has great potential and even if he never lives up to it, he is still a human being. To paraphrase Eminem, never judge him, dude, you don't know what the f*** he's been through.
I do, and there but for the grace of God go I.