The specialties of the house were added to Black Market's front window on Avenue A yesterday... 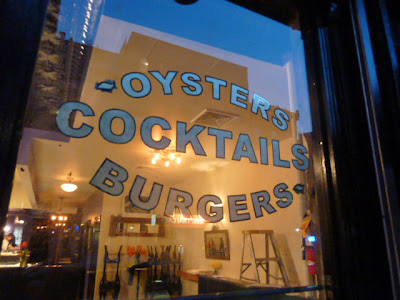 Upon opening in February, the owners reportedly planned to keep the iron gates down even when they were open... And last month, the gates were raised... So maybe they want to be a neighborhood joint after all?

Previously on EV Grieve:
So Bono, Michael Stipe, Natalie Portman, Kirsten Dunst, Jason Schwartzman, Spike Jonze and the Olsen twins walk into a bar on Avenue A...
Posted by Grieve at 6:53 AM

Ain't nothing going on but the rent.