As you may have heard, NYU held its first open house last night since formally unveiling its ambitious NYU 2031 invasion expansion plan. Before the event, Andrew Berman from the Greenwich Village Society for Historic Preservation spoke out against the plan. We weren't there. But a lot of other people were. So here's a listing of some of the coverage....

The official NYU news release. And here's the plan from NYU.

Critics Turn Out at Open House on N.Y.U. Expansion (The New York Times)

Meanwhile, Alex at Flaming Pablum posted two illustrations of the future campus that a reader found and were since removed, evidently, from NYU's Web site. Here's one of them: 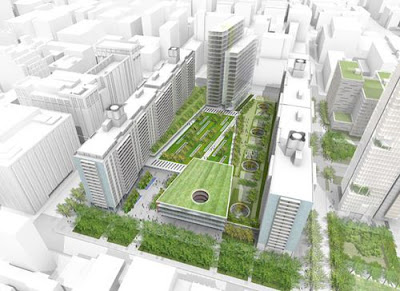 Finally, some words about the NYU event from Save the Lower East Side!:

Scarier still is their silence on the East Village. Looking at the fantasies-afar, you know it's going to pop up here, but they don't give a clue as to where.

The vocal anger of East Villagers prompted the creation of this NYU Expansion Task Force and all these open house presentations. It's good to know that NYU is still so afraid of the East Village that they don't want to tell us where they are looking for East Village real estate.

nyu probably will "rescue" st vincents.
my scenario is that they will wait till st vincents is useless and the community desperate.
all those unprotected (no close emergency room) students (who ride special buses), and then the neighborhood folks who also need a full service hospital.
and then nyu will swoop in to grab up another piece of real estate and pretend to be the shining knight on a white horse, while they add the space to their expansion plan and barter for no restrictions or landmark limitations.

@blueglass - that's actually not such a bad idea, if the expansion actually happens. The building is already there and, traffic-wise, it probably wouldn't change much. I don't get why NYU *must* be in Manhattan - why not build a compound for itself outside the city? If their argument is they must have the "urban experience," then it doesn't make any sense to keep destroying the city.