I finally had time to sit down last night with the new issue of New York magazine... where there's a feature on this swanky loft in the Christodora ... 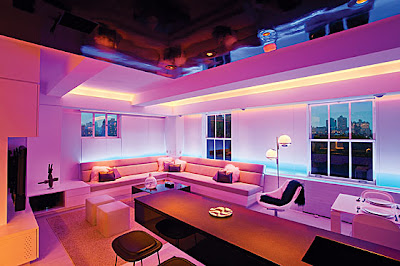 Architect Joel Sanders’s clients (a lawyer and an economic consultant) left New York for San Francisco a decade ago but knew they’d come back someday — preferably to an apartment below 14th Street that felt like a “well-designed hotel suite.” How about an East Village loft with LED fixtures that cast a Day-Glo aura on the walls? Perfect. After looking at more than 50 places, the couple found what would become their future retirement pad (and current pied-à-terre) — a one-bedroom in the Christodora ... The result: a 1,140-square-foot loft that — with the push of one of eight preset buttons — is bathed in pale neon pink, or warm gold, or lime green. Sanders sees the lighting design as something of a metaphor for neighborhood transformation. The Christodora, he points out, has had a tumultuous history, starting life as a twenties settlement house for low-income families before becoming an emblem of the East Village in the throes of gentrification. Two decades later, passions have cooled, but the neighborhood—and its dwellings — are still pretty colorful.

Wonder if this explains those spooky red lights that I've seen in the past....? 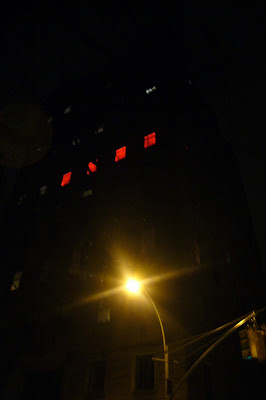 Email ThisBlogThis!Share to TwitterShare to FacebookShare to Pinterest
Labels: Avenue B, Christodora House

they symbolize neighborhood transformation? why do these people come up with such bullshit? why don't they just enjoy their lightshows for what they are? pretty distractions, empty of meaning. wouldn't that be alright?