A candle for Grace on Avenue B 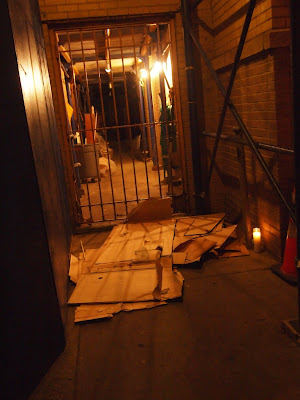 We've received several e-mails since our post this morning about a DOA found on Avenue B between Seventh Street and Eighth Street under the scaffolding at St. Brigid's. Several people have said that the victim's name is a homeless woman named Grace. Police sources have said no foul play was suspected in her death.

Tonight at the scene, someone set up a lone candle to mark the spot where she died...

Updated. 11:05 p.m. Colin Moynihan has more on the story at the Times:

A woman found dead on an East Village sidewalk Sunday morning was known to several people in Tompkins Square Park only by a first name, Grace. She was a regular in and around the park, they added, and often slept outside.

A man who said he had befriended her in the past few days said he had called for an ambulance on Sunday morning when he was unable to wake her.

“She was a very beautiful person,” said the man, who identified himself only as Tony, “and she had a beautiful heart.”

How heartbreaking. May grace rest in peace.

Wow, she was only in her thirties!

Was Grace from Ireland. News has spread here that she was from Drogheda but can't get any confirmation of this. (Don't want to give her surname incase it's not true)