After failing to land a club restaurant, landlord lobbies for a nail salon

So, we've written plenty about 14-16 Avenue B at East Second Street ... where plans for a big club restaurant were shot down by CB3 (and, perhaps, for good reasons — one venture called for a 3,000 square foot Italian restaurant, catering company and lounge "with an occasional D.J.") ... first last February ... and later in September.

Anyway! Perhaps the landlord has given up the nightclub restaurant dream... check out the new listing for 16 Avenue B.... 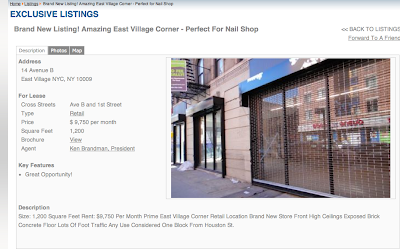 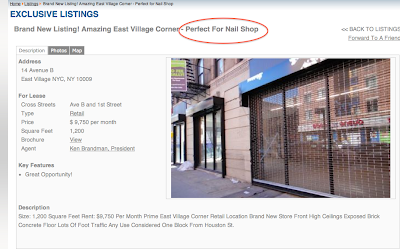 Of course, it could also be a bar disguised as a nail shop... works nicely with barber shops...
Posted by Grieve at 6:55 AM

Email ThisBlogThis!Share to TwitterShare to FacebookShare to Pinterest
Labels: 14-16 Avenue B

If only the Chinatown arcade could move in here...