Today's sign of the apocalypse: Your future gateway to the East Village! 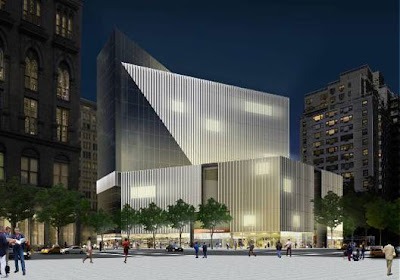 From The Wall Street Journal today:

Edward Minskoff, a member of one of New York's storied real-estate families, is hoping to begin construction in July on what would be the city's first large "speculative" new office building since the collapse of Lehman Brothers in 2008.

Mr. Minskoff says he will begin construction without any pre-leasing on a Maki and Associates-designed, 430,000-square-foot tower on a site overlooking Astor Place that he acquired in late 2007. Just outside the trendy East Village, it's an unorthodox location for an office building. Most of the city's modern office space is in Midtown and the Financial District.

But in a recent interview, Mr. Minskoff predicted that the building would attract high-tech companies, investment banks, insurance and advertising firms. "It's an area that a lot of young people want to work in," he said. He plans to charge about $65 a square foot per year, a modest amount for new space.


The Journal piece came via Curbed, who note: "Though Astor Place seems like an odd location for a new office building, AOL and J. Crew already call the gateway to the East Village home." True. Construction is slated for July, with an 2013 opening date. May want to enjoy that Film Academy coffee while you can.

Email ThisBlogThis!Share to TwitterShare to FacebookShare to Pinterest
Labels: Astor Place, the apocalypse

OK, after catching my breath from the shock of that image... I'm sorry. The very idea of having anything but the cube at Astor Place sickens me. I'm very pleased with the proposal to have the area become more pedestrian-friendly by no longer allowing for the two South-bound through-streets.

I'm not averse to change per se. But I am averse to structural changes which are wholly incongruent to the area's look and history and atmosphere.

Yeah, I'd likely have that first reaction, though these renderings have been floating around the last three years. I think I first saw them in New York magazine. I did a post on it some time in the spring of 2008. I'm still processing all the changes coming to Astor Place.

And maybe the Continental will want to raise their happy hour priced with the influx of office workers.

Any other words fail me.

Is that corrugated metal? This thing will burn our eyes out on a sunny day.

Exactly where would that thing be?

I very strongly support the pedestrian plaza changes to Astor Place, the expansion and improvement of the Cooper triangle park, new pedestrian plaza, and narrowing of 4th Ave. (In fact, I think that stretch of 4th Ave/Cooper should be completely closed to traffic.

However, this building is an eyesore and as out of place as Cooper's glass monstrosity with the gaping hole that looks like terrorists flew a plane into it.

This is not progress: demolish one boring but easy to ignore ugly building, replace with an overwhelmingly ugly building which you can't ignore, even while wearing dark sunglasses. Migraine sufferers, beware!

51 Astor Place. Another question is if Cooper/Minskoff are providing public space at or equivalent to the former Stuyvesant St roadbed. Any news on that, or more detailed renderings?

Build that monstrosity in Times Square, it's wrecked already.

What's in that spot now is unappealing as well, especially on the 9th Street side. This replacement isn't any improvement...but perhaps not be as offensive as Cooper Union's new building or the awful Astor Place Tower already are.

The effects of the rezoning. I had called this. It was only a matter time before tall building start appearing near 3rd and 2nd Ave just South of 14th St.

This is what now passes for "progress" in urban redevelopment:

Demolish an ugly but easily ignored building with an even uglier but impossible to ignore building.