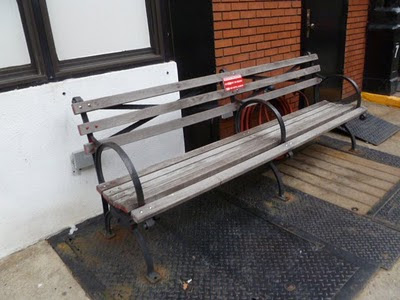 From an "exclusive" in the Post today. The City forced the Hells Angels to remove the bar from its bench outside its East Third Street HQ. Per the Post:

The city cracked down on the club after The Post recently publicized its efforts to keep pedestrians off its pew, said the Angels' lawyer, Ron Kuby.

Only members had been given keys to unlock the bar so they could sit down.

Department of Transportation officials noted that the bench was on city property and the organization would now need a permit for it, Kuby said.

A DOT spokesman said the two sides are trying to work out a solution to keep the bench.

Previously
Posted by Grieve at 11:59 AM

A SAD DAY when FOLKS are Hungry Homeless, and dieing in TSP The city wants to move this along A.F.F.A

Send Sadik=Kahn to the clubhouse to collect the permit fee.

'course, they still have their permanently "reserved" parking spots out in front on the street.

So they put out a bench warrant on this? (Oof!)

Anonymous if you are such a tough one yourself I suggest you go over and sit on the bench ! You are a real coward and there is no way you would say most of the crap you do if you had to sign your name to your comments. Leave the HA alone and screw the tourist yuppie scum who stay in the gentrified hotel motel eurotrashcrashpad next door.

John Penley, you need to take a chill pill. No one said anything threatening to or about your beloved biker club.

Dude, by the way, don't you realize that all of those Anonymous posters were different people?

And, sure, if I walk by there and am tired, I'll sit on that bench with nary a care. City property. End of story.

Do you think one of them said "Ew! That looks tacky!"

Will Mr Penley, and the " ZIPPIES" HAVE A BENCH IN AND SMOKE-FEST HERE

since when does the city own and police randomn benches around the city? i smell bullsh*t.
under bloomberg the city will ALWAYS side with the tourist/yuppiescum faction and keep screwing the natives every chance they get.

I know there are more than one anonymous posters here. I was talking about anonymous number 1. A real jerk. I photographed Sonny Barger sitting on that bench. Go third street beat yuppies and the city. Props to Ron Kuby for representing them.

Let's say to Mr . Penley, " WELL DONE" Once more you are there ready and willing A BIG SHOUT OUT

Why are romantising the Hell's Angels again? Because they've been in the neighborhood for a long time? They were and possibly still are a criminal organization. I don't see anyone looking out for the Latin Kings in the same way. I think the Latin Kings need a better PR firm or maybe they can have someone write a book about them.

I walk by all the time and never see any Hell's Angels sitting on the bench. I wouldn't be surprised if they're just baiting people with it to get some attention. They're publicist probably came up with the idea.

City property? - ok - so is 'the city' shoveling that sidewalk when it snows?...
just askin'...
And yes, anon@ 1:59 - maybe the LK do need better publicity 'cos I've given space and deference to the 3rd St Hells Angels (and taught my son the same) since I was a wee hippie interloper in the EVill back when.
just seemed wise...
just sayin'...