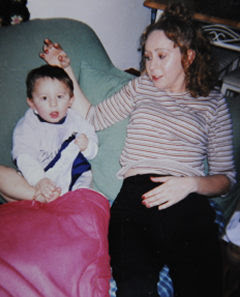 The Daily News has a follow-up today on Grace Farrell, the 35-year-old homeless woman found dead early Sunday morning in an alcove next to St. Brigid's. They speak with her 12-year-old so Oliver.

An autopsy showed no sign of foul play, but Oliver and his father, Al Muniz, who live in the East Village, blame the street hustlers in Tompkins Square Park for plying her with booze and cocaine.

"Drugs and alcohol ruin you," said Oliver. "The guys in the park knew she was weak."

He denied claims by her street friends that he abused her.

"Any man who lays his hands on a woman is a coward," he said.

[Photo of Grace and Oliver via The Daily News]
Posted by Grieve at 12:15 PM

What kind of sicko let's a 12yr old that just lost his Mom talk to reporters?

If any good can come out of this, I do hope this boy grows up to be a successful detective. He sounds sharp.

Poor kid; alcohol abuse just destroys families and lives (I know firsthand). But he seems like a sweet, smart young man. May his mom find the peace in heaven that she sought here on earth.

My heart is with you, Oliver. And a detective sounds like a GREAT job! I always wanted to be a PI or a spy meself. :)

So close and yet so far.

The way you've cut the article, it sounds like the son was accused of abusing her, but it's the father.

It is so sad that a 12-year-old boy was left without his mother. What a piece of work she was, choosing the bottle over her kid but it happens all too often.

I've only followed this story over EV Grieve, as I've been following union activities in Wisconsin. She didn't choose the bottle over her son. If the mother was abused by her son't father she had been formally told by her mate she was worthless. Self medication? Probably. As well his having a place to house a child while she had none? Sounds like the father pretty well alienated the boy anyway. This is a story I'll read more about.