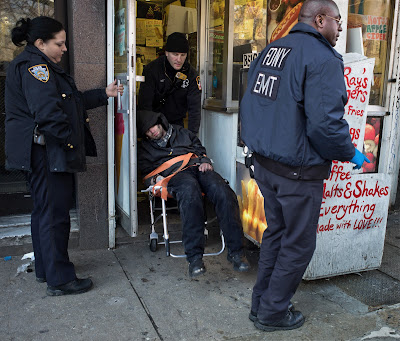 The NYPD and FDNY EMTs were called to Ray's where L.E.S. Jewels had collapsed yesterday afternoon around 3, Bob Arihood notes.

Witnesses said that the Ray's counter person had called 911 several times earlier because Jewels had allegedly accosted and threatened a customer inside the store.

As Bob's photo shows, EMTs removed the restrained and unresponsive L.E.S. Jewels from the store and took him to a hospital.
Posted by Grieve at 6:45 AM

maybe Les Jewels needs some Down home cookin and a clean bunk Maybe Uncle Bubba, is still in C section ....

I don't know Jewels and I gather he's a giant pain in the ass, but he clearly has a serious addiction problem and probably mental problems too. And even if he didn't have these issues, allusions to prison rape are never funny, 8:59. If you can't have a heart for your fellow man (maybe you know Jewels; I don't know) at least spare the rest of us these type of "jokes," please.

I actually went to Ray's yesterday for a sandwich around this time. Jewels was slurry and kinda laying over the bar. While the older counter woman went to make my sandwich, he fell back on to the wall and then passed out on the floor. He was unresponsive as I tried to wake him to move. The counter woman had 2 friends there and they were calling 911 repeatedly.
I left with my massive $5 sandwich and he was still passed out on the floor around 2:30.

Seriously, they need to lock this guy up. He's dangerous.

this guy has been screaming at people on Ave A for years - it's sad and I hope he finds the help he needs with his addiction, as well as the rest who hang out outside Ray's.

I'm sure I say this for a lot of Folks ray, does not need " LES JEWELS" AKA JOEL PAKELA acting up all ray is doing is running a service to the people maybe it is time to get some Legal action to help ray about this matter

Oh whaaa boo hoo the anonomoys guy doesnt like the joke. Shutup you crybaby, poeple can joke all they want its america who do you think you are to tell someone what they can or cannot say. I didnt find it funny either but you have NO RIGHT you ass!
And yea, you dont know Jewels, so your opinion means nothing to anyone. If you care so much, go outside and help him you coward. The view is nice behind a keyboard you liberal douche. Your the kind of guy that would give the homeless money and then cry when they come back to your street corner.