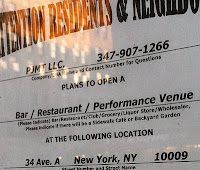 Last Friday, we reported that Two Boots founder Phil Hartman's name is attached to the new venue proposed for 34 Avenue A, the space that was most recently Aces and Eights ... and Mo Pitkin's before that ....

Hartman sent us a note during the weekend with a few more details on the space:

I've been approached by a local music booker/promoter about helping get the old Mo's space re-opened as a music venue. His vision is to carry on the tradition of the old Knitting Factory and Tonic, and I love the idea of seeing the space revived for the use for which it was created, and to wipe out the stain that was Aces & Eights. There would also be a restaurant component on the ground floor.

My role is as an advisor and a cheerleader — I live and work within a block from there and think it would be great for the neighborhood. So, no, I'm not "re-opening Mo Pitkin's" but hopefully the spirit of that place, and of the old East Village, will be revived!

This is one of the items on the docket for the SLA & DCA Licensing Committee next Monday at 6:30 pm — JASA/Green Residence - 200 E. Fifth St. at the Bowery.

[Updated]
Patrick Hedlund at DNAinfo reports this afternoon that concert organizer Todd Patrick, aka Todd P, is also involved in the project. You can read more about Todd Patrick in this Voice profile from 2006.
Posted by Grieve at 6:59 AM

So now he's saying that his role is "as an advisor and cheerleader", not business owner per say, that it's all because of being approached by a music promoter? He's trying to align himself with the Knitting Factory and Tonic by co-opting their identity? He's saying that it will not be Mo Pitkin's but have the spirit of Mo's? He also would like to "wipe out the stain" of Aces and Eights, as if he never sold his liquor license to them for a profit, and he also wants a restaurant? Now how passive aggressive and egotistical is this commentary? He makes it sound like he's not a businessman but rather some kind of genius mystic visionary, and that's him saying it!

What is the soundproofing like in that space? Did Mo get a lot of sound complaints from neighbors?

This neighborhood was very lucky to be rid of Aces & Eights when it was, and replacing it with another Pianos is just as much of a potential new-nightmare as any other bar/club. As for "carrying on the tradition", The Stone is doing EXACTLY that, is two blocks away, and desperately needs support.

Since Aces and Eights met with such resistance, could the owner still stuck with the place simply be trying to get some legitimacy by involving/invoking a local culture-busuiness person and some beloved clubs of the past? If this is so, I hope the neighborhood and the CBA see through a crass attempt.

@anon 3:17. Crass attempt? It was the board's idea! At the meeting when they turned down the last iteration of 34 Avenue A, Dave McWater said that Phil Hartman was the only reason they approved the original license, and told the current owner that "you're no Phil Hartman." If someone said that to me, I'd go out of my way to get Phil Hartman on board with me.

"You're no Phil Hartman."

If McWater really said that, whoever he said it to should have said, "Thank you."

Cry me a river Phil - you blew your chance with Mo's and now you are just trying to use some of your old street cred to give it another go.
But enough history Phil - I don't understand this whole sheboyhgan- Are you involved in this new place or not?? Are you trying to pull the wool over our eyes? You must be one of the owners as the notice CB 3 requires the "applicant" to post on the establishment seeking a license has your name on it.
That's the rules so . . .maybe you should try playing by them.

does anyone buy this cookiepuss/rocky raccoon guy's bullshit?

what is up your ass about this small time entrepreneur?

this concept sounds like a rather responsible community fit. stop hating everything you see, silly internet person!

Why are you guys such haters! It's sounding like we are on Curbed over here! Mo Pitkins was a great place! And I'd rather have that back then the string of empty storefronts that have been piling up on that stretch of A! Seriously guys.

this sounds about a million times better than 90% of what's on avenue a already.

That's not saying much. Aces and Eights was a PIA for those who lived nearby. If it was going to re-open as actually another Tonic, say, that would be cool, but the reality may be more like Aces on the first floor with some performances on the 2nd. I don't "hate' per se, I just don't like getting woken up every Fri and Sat at 3-4am by drunken shouters pouring out on the street from Aces and Eights, or whatever new version of opens there.

12:59, it sure sounds like there would be no convincing you that *anywhere* or *anyone* isn't going to be "another aces & eights"

the fact is these operators have a good track record, and a concept that is sound (and quite tame.)

my advice to you would be to pick your battles. there aren't concepts as well suited for the neighborhood that up often.

These operators are making a conscientious decision to *not* do the most profitable, tacky space in this location. You don;t have to applaud them, but maybe hear them out?


What don't you understand...there are so many choices...stories to hear...articles to read...atrocities to absorb... which one are you having trouble understanding.
I like the most recent one from the Village Voice posted at 6:43p.m. last night. The Lo-Down lists it. This is a good one. So now there are a number of partners, and other people who Todd Patrick chooses not to name, as well as financial backing and other and powerful and talented people.
He is condescending to The Stone and Issue Project Room as well as to the EV/LES and Brooklyn, including The Knitting Factory which happens to be alive and well in Williamsburg.

l like the way he says that "this is not an indie club, not a rock club, and certainly not a dance club." Instead it will be purely avant-garde."

Their concept is actually an exploitation of the avant-garde.

We should be supporting our not-for-profit performance venues and coming up with new and innovative ways to support the arts and artists. Check out The Stone for some really happening avant-garde music performances.

Just send the money directly to Todd Patrick, Phil Hartman, Jevan Damadian, Mike House and and all the other big dicks involved in this very calculated and most exploitative form of capitalism.

I just posted excerpts from the Fork in the Road article that Cookiepuss references.

you should adjust the tinfoil of your head, I think the voices are getting through again

The Stone is an intensely boring place that makes me less inclined to go out and see great performers perform. If someone is proposing a more comfortable space to see challenging music, I'm all for it.

@anon 11:46
No haters here - just pointing out the facts concerning Phil and that dude from Aces and Eights. They are not small business owners - Phil has a pizza empire and the other guy from Aces and Eights owns like a 100 Stand Up MRI operations - he has plenty of bread. To your point though "this concept sounds like a rather responsible community fit" then why don't they open a not-for-profit performance space - perhaps they can provide low-cost artist studio space or rehearsal space on the upper floor. If I recall one of FEVA's goals ( i think it is in their original mission statement) was to provide affordable artist housing and health insurance. This is about money man not art - plain and simple, thus the need for a trendy restaurant/bar element with a full liquor license.

the not-for-profit system stinks far worse than the system of running an honest small business.

Emmensely better to live off the support of your community - expressing their approval with their feet and with their wallets - than to jockey for the favors and handouts of rich people and powerful "institutions" the way non profits have to do.

Anyone who's been around the block realises that 99% of "charities" exist largely to pay exorbitant salaries to their executives. I'll take a small, tastefully run club over a stuffy "community art space" any day.

This phil hartman hating guy is so obsessed with swaying everyone's opinion that he's cutting and pasting and reposting the same posts on different threads. That is some full on stalker shit.

Hartman should watch out for this nut. Definitely seems unstable, possibly dangerous?