We've been following the gut renovation at 325 E. 10th Street across from Tompkins Square Park...As we reported in October, the front building is part of the Hotel Toshi empire, the short-term apartment rental network in New York City. Meanwhile, the rear building is residential. (Check out our tour of the building here.) 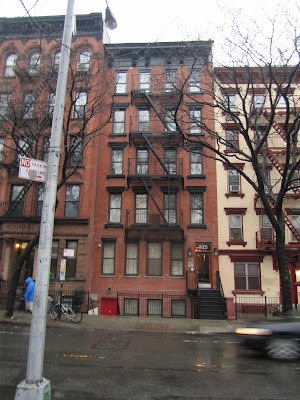 One of the first residents of the building recently shared his experiences at 325 E. 10th St. since moving in last fall.

According to the reader:

- No heat until December 15th
- No mail (or mailbox) for the first three months
- We've never met our landlord
- Leaky Ceilings
- Rats in the hallways
- Almost NO hot water
-...and to this day, the entire building is still without function gas stovetops in the kitchen, as they forgot to rerun the gas line to the back building during the renovations.

The resident said that the landlord is now knocking $150 off the rent, though that didn't start until last month. As far as the cooking issue, the management company delivered hot plates to their doorsteps. (The Toshi guests now have electric ranges.)

As for the actual apartments, "They're nicely appointed but [there have] been horrible living conditions." According to Streeteasy, the prices here range from $2,000 for a studio to $4,000 for a two-bedroom apartment. 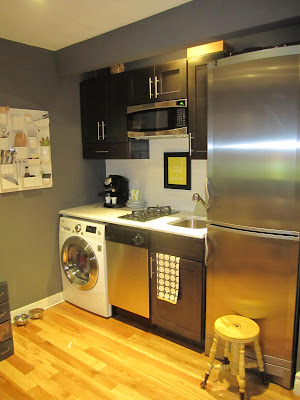 Meanwhile, we asked the resident about the Toshi tenants. The arrival of a Hotel Toshi in at least one neighborhood hasn't always gone so well. In a May story from The Brooklyn Paper titled "Neighbors say Hotel Toshi is a horrorshow hostel":

A hipster hotel that occupies part of a converted loft building in Williamsburg has become such a crash pad that some renters are moving out.

Tenants of a six-story building on Driggs Avenue and S. Fifth Street are accusing the operators of Hotel Toshi of creating a nuisance by allowing their transient guests to throw rowdy late-night parties.

Per the 325 E. 10th St. resident: "Toshi hasn't been loud in this building. Luckily, we have a courtyard separating us, so they aren't roaming around our hallways, and we have a separate roofdeck. My only issue with Toshi residents is they leave their trash in the hallways and front stoop when we have area for all of that in back."
Posted by Grieve at 7:00 AM

Back in December DNAinfo ran a post about 325 (which mentioned you, Grieve) talking about how the city had hit them with violations for running illegally as a hotel where none was zoned. So why are they still allowed to operate?

Thanks for the link, Lisa. I missed this piece in DNAinfo.

My husband and I are planning to visit NYC for the first time in May 2012. We live in London and were thinking of renting an appartment in East Village for a couple of weeks as we have done in other countries. We saw this one (325 E 10th) advertised by a company called FeelNYC and thought it would be ideal for us.

But since we first started planning this holiday, we have discovered>
a) a lot of controversy about "vacation rentals"
b)confusing legislation that puts into question even the legality of renting an appartment, and
c) a great deal of local resentment expressed about "short term renters"...

That is the worst bit. I have never read so much resentment about visitors (who, by force, are "short term").

Maybe we should go somewhere else?