As mentioned Monday night, a resident is circulating a petition (where, I have no idea) to have the "Hot Chicks Room" sign removed from the incoming new home of the Upright Citizens Brigade on Avenue A at Third Street... 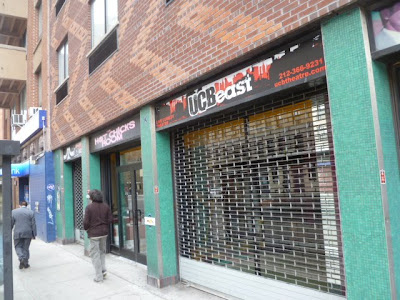 Via e-mail, I asked Alex Sidtis, managing director of the UCB in Chelsea, for his reaction... and about a possible opening date.

"We've gotten a lot of positive attention and support from the community so I'm not sure where the ire is coming from," he said. "The fact as the matter is that no one who has a problem with this sign has personally come forward and talked to me about this sign. We are shocked there is a petition going around over this but are eager to understand the cause for concern."

After our e-mail exchange, he spoke with CB3 District Manager Susan Stetzer about the sign, and will have further discussions with her about it.

"We really aren't trying to be straight up offensive, and it feels really surreal," he said.

Meanwhile, he also said that no one involved with the UCB placed the signs on the East Village mailbox.

"We're eagerly awaiting clearance from the city to open and start booking shows."

Patrick Hedlund has more on this story at DNAinfo:

Angry local residents have recently taken their complaints to the local community board and even 311 after the sign went up near the comedy troupe's forthcoming space near East 3rd Street, said CB 3 district manager Susan Stetzer.

"The issue that that has been expressed to me is that they feel like it looks like 1970s Times Square," said Stetzer, who lives on East 3rd Street near the space and agreed with grumbling residents that the sign wouldn't discourage the hordes of rowdy bar-goers that regularly flood the block.

Stetzer's building-mate is even starting a petition to get the sign taken down.

"I just find it, for this neighborhood, very inappropriate and repulsive," said Felicia Catgiano, 66, who noted there is an elementary school and church just up the block.

"We don't need a sign like this here. This is a neighborhood — this is not the Red Light District."

it is not the "hot chicks" sign in and of itself. it is what folks now think of the east vilage, as a playground for college students, upperclass snobs and out-of-towners.
the sign just adds to that impression of our neighborhood as one big free-for-all.
the bank on 2nd ave & 10th street had graffiti illustration inside. these are not the things we want our neighborhood to be known for.

Come on, it's sketch comedy and improv'. If there are lines outside, I'll eat my shirt. I don't see how they keep one venue open, moreless 2. Must be non-union.

I am shocked and feel deeply offended at having such lascivious signs in our puritanical neighborhood. Makes this old geezer wanna run out and look at hot chicks.

It’s always good when an organization is willing to listen.

I do take offense at the sign…it may be hard to understand why the idea of females as baby birds would be a problem. Chicks are so cute and yellow and Easter is on its way. Maybe it has something to do with the history of women being objects of sexual exploitation?

The powers that be and their unwitting (or witting) agents effectively end any upset about sexism by trivializing it. It happened successfully under Reagan when the women’s movement, whose intention was to stop the oppression of girls and women, was reduced by the media to silly white women burning their bras.

Hard to explain why even this stupid sign lends itself to the slippery slope of women’s attempts at self-respect being laughable. If we object to sexism we are told we have no sense of humor. I leave it to you to compare this with other oppressions.

We still make less then men for the same work, we are at real risk of losing fundamental rights to our own bodies, we are used as pornographic material to buy momentary relief to ward off the loneliness of men, still sold for sex (girls too) and as older women are tossed into senior ghettos, drugged and left until we die off. Our bodies must be uncovered or covered depending on the whim of male dominated societies.

Sorry if it seems to spoil the fun and yes, it’s “just” a sign. But targeting women who are already under the gun is actually not a daring salvo for freedom –it’s just shitty and trite.

Btw the reason the clip worked at all was because it was making fun of the guys compulsion.

"The fact as the matter is that no one who has a problem with this sign has personally come forward and talked to me about this sign."

If people are going to take the time to hash this out endlessly online (and by petition), perhaps send these long winded comments TO HIM. These anonymous complaints on a blog are just another place for people to complain endlessly without ever actually having to take action or do anything about it. And THAT is something that I take issue with. But I guess that will never change for some of you.

Public sign, public gets to respond. Can’t always pull off the personal conversation, but I agree, generally best. My comments are not just for the owner however.

Sometimes writing to express important ideas is an “action” and is “doing something”.

Re: “anonymous complaints” I’m “bowerygals”, pretty easy to look up. While you are “Anonymous”, anonymously complaining, yes?

I wasn't talking to you (although yes, your comment was thorough). I was directing it to the 50+ people who've already commented on this topic on various threads. I found it supremely interesting that after all of the complaining, it comes out that not even one person contacted the guy directly.

Yes, it's important to hash things out online, but doesn't it concern you that not one person upset about this contacted him? Honestly, I don't care about the sign one way or the other, but I find the behavior of those offended quite interesting to watch.

Luckily it seems we've moved on from this topic, as he's taking it down!

how about a Doucheoisie Room?

Hot chicks? Like one of those nice Pollo Peruano places?

When did out of touch old folks start controlling the East Village?

These narrow minded ninnies do not speak for me.

These petitioners actual don't realize how ridiculous they look here? I kind of feel sorry for the poor old cranks, worked up abut something they don't understand.

Unfortunately the stink they made about this sign is now an embarrassment that the rest of the city is laughing at us all for.

Could you guys pick your battles more thoughtfully, and do a little bit of research next time? There are people dieing in Japan for chrissake.

"The Hot Chicks Room" is based on a UCB sketch. And the reason they can have 2 spaces is because the place is very popular for a lot of great comedy shows. How silly that this is turned into some kind of argument about sleazy 70's Time Square or looking on women as objects. These protestors are way off the mark here.

How sad! My once edgy, artsy neighborhood has now completely submitted to the attorneys and other professionals who have infiltrated over the last fifteen years. We could use a little pushing of the boundaries here- people will start mistaking us for the UWS!