This (kind of!) confirms the rumors that we had been hearing... and mentioned back on Feb. 23: Phil Hartman is going to make another go at 34 Avenue A, which was most recently Aces and Eights.

Hartman and his brother Jesse opened Mo Pitkin’s House of Satisfaction — the two-level restaurant/bar/performance space — in 2005.

It closed two years later. As New York put it: "[Mo Pitkin's] was the promised land for the busty neo-burlesque stars, pseudo-sane performance artists, and guitar-playing trapeze acrobats rendered homeless by the closing of Fez (and Surf Reality and Collective Unconscious and every other small, anything-goes downtown venue)."

The landlord sold the building a year later, Aces and Eights arrived in March 2009 ... So enough history...

Phil Hartman's name is listed as the contact on the just-posted CB3 flyer outside 34 Avenue A... 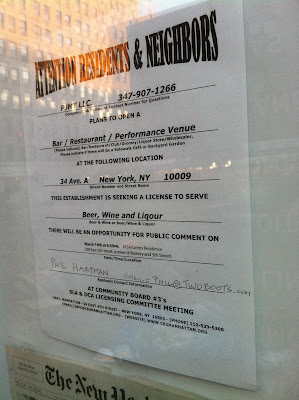 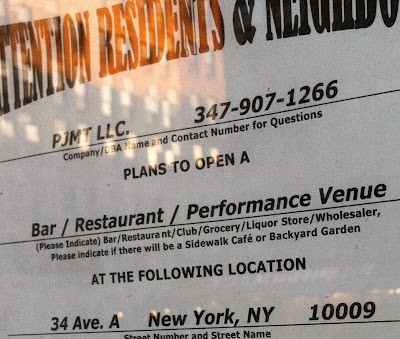 We reached out to Hartman last night to learn more about his plans. We haven't heard back yet.
Posted by Grieve at 7:00 AM

This is freakin awesome. I was a HUGE fan of Mo Pitkins and never understood what happened, why they left (except for the obvious insane EV rent problem) b/c there was always a crowd there. Anyhow.. Yeah Phil! Bring it back! Avenue A sorely needs CULTURE to battle the fratjocks' vapid, moneyed, legions..

Yay! That's wonderful news! I loved Mo Pitkins! It was my local spot. I had many a fun night and morning after brunch there. Can't wait to tell my friends!

I wish that Phil Hartman would bring back a real video store. The one at Two Boots is limited.

So help me understand why the community should support Phil in this eneavor. Here is the deal:
He got a full liquor license for Mo Pitkins at 34 Ave A a few years back to open a performance space/bar. This location never had a license, but he got it because he was a "good guy supporting the arts".
The business was a bust - it had nothing to do with a rent increase -he needed money to deal with the ever expanding Two Boots Empire (check it out - this is a national business).
So he sells the joint to that shit show called Aces and Eights and rides off into the sunset leaving the community with a nightmare. Same thing with the Pioneer Theater - no license, gets a license "for the arts", then sells to a huge comedy club. Meanwhile he keeps open his locations all over the City, Brooklyn, Los Angeles, Bridgeport, Baltimore etc.
Couldn't he have shut one of these down to "save the arts" in the EV and left us with the Pioneer Theater, or at least the freakin video store.
So we should give him a second chance to screw us. If he doesn't make enough money on the new place - who does he sell to this time? Don't feel sorry for this guy. This is not the story of some local hero trying to save the arts in the EV, but of another guy trying to make a buck off the popularity of the EV. This will not be a place for the community, but instead another destination for the tourists staying at the Bowery hotels etc.

He had nothing to do with Aces and Eights... After Mo's closed, the landlord sold the building to an entity called LAMNG Corporation for $4 million. (Per the Observer.) The new landlord then leased the space to Aces and Eights.

Moe's closed because (among other reasons) Phil Hartman went through a rough divorce and needed to divide his properties.

As for Pioneer Theater and the video store, the internet and Netflix have killed off those business concepts.

Lastly, describing the Upright Citizens Brigade theater as "a huge comedy club" is wildly ignorant. UCB is quite highbrow, it has more in common with Off Off Broadway Theater than with a conventional comedy club. Think: Second City.

This is great news! The food at Mo's was excellent and I saw some really great shows there. Anyone know what happened to the beautiful blue neon sign?

ok so LAMNG Corp bought the building but Hartman was still able to sell his liquor license.
I also heard about the rough divorce but how is that our problem? Why have the video store at all if there's no market for it? People seem to still like to rent movies. The Pioneer Theater also did not originally have a liquor license, he was granted one, he had an asset and was able to sell it. Now he wants a full liquor license again for the former Mo Pitkins, Aces and Eighths space. If it's a performance space why not beer and wine?
I miss the Cajun place. Why not bring that back?

Too many businesses sold off while his pizza empire proliferates in cities throughout the US.

I think he just wants the whole shabang! Well he had it and blew it. Don't feel sorry for him, he was able to sell his assets.

@EV Grieve:
Hate to say it, but I think your wrong on this one Grieve. Check out the SLA web-site and minutes from CB 3 November 2008 meeting. Mo Pitkins Corp transferred their license to 34A Restaurant Corp. 34A became Aces and Eights. I don't know about the RE transaction but Phil sold his asset - the liquor license to 34A Restaurant Corp. During the recent attempt to transfer the license again David McWater told everyone who would listen that they gave 34 Ave A a license because it was Phil Hartman and that he and the rest of CB 3 approved the transfer (sale) of the license because Phil was having financial difficulties. This is the historic problem we all have with this process- you give this guy a license to open Mo Pitkins and then he can sell that license and then you got stuck with someone else who does not have the same intentions. Check out the May 2009 minutes for more of the story. So I will say it again - Phil sold his license and we got stuck with Aces and Eights that is the fact period.

Phil Hartman is a sweet guy and has always donated free pizza for community events for years. I know he has been criticized for things in the past but all of us who have done things of an artistic or political nature in public for the neighborhood have. He has always been nice to me and I wish him all the best if he redoes the space. FYI Phil I am an excellent bar cleaner guy which is what I did in Erie so give me a job. HOWL ON PHIL HOWL !!!!!

Thanks for the background, anon 3:03 ... I did forget about the transfer part of this!

And you make a good point about the licenses. We've all seen perfectly lovely, competent people with proposals to open bars... and yet they are turned down and/or there is neighborhood opposition ... Nothing against these particular people, but who could possibly come after them if the business fails... Today's bookstore cafe is tomorrow's Superdive!

I'm very excited about this news of a potential performance venue coming back here. I don't have all the facts of Mr. Hartman's previous dealings. Regardless, I always believe people deserve a second chance. (Except for Superdive.)

uh oh....sounds like someone is still holding grudges from the old days of HOWL...but as Seth Godin points out in his new book-"Poke the Box"- it takes a unique individual to try something new and innovative...yet "almost all people believe they are capable of editing, giving feedback or merely criticizing". Enough with the critiques of Phil- get a life you guys!

Yeah right can't argue that lots of people in this day fall into this category of being "a unique individual to try something new and innovative". As a matter of fact so many architects and developers, restauranteurs, club owners, fashion designers, etc., consider themselves in this category. Bloomberg falls into this category.
You know what.. Phil Hartman has some fucking pair. Listen to the facts. There are so many more facts other than the many scandals, some involving money some not and people that Phil has pissed off in and affiliated with HOWL. Which fact don't you understand. Phil is primarily a businessman with millions in assets and an international pizza empire. Him trying to weasel his way back into the EV scene by being some kind of hero with the re-opening of a music venue after already having one at the very same location, as well as a number of other businesses on Avenue A, and then selling them because he owed out money is ridiculous. We should be supporting our not- for-profit performance venues and coming up with new and innovative ways to support the arts and artists in the EV and LES. Check out The STONE for some happening music performances.

Cry me a river Phil - you blew your chance with Mo's and now you are just trying to use some of your old street cred to give it another go.
But enough history Phil - I don't understand this whole sheboyhgan- Are you involved in this new place or not?? Are you trying to pull the wool over our eyes? It would seem that you must be one of the owners as the notice CB 3 requires the "applicant" to post has your name on it.
That's the rules so . . .maybe you should try playing by them.

"After Mo's closed, the landlord sold the building to an entity called LAMNG Corporation for $4 million. (Per the Observer.)"

Phil and his companies owned the building! He was the landlord! Or

"The Pioneer Theater also did not originally have a liquor license."

Actually, it never did. But it didn't sell alcohol either. That was downstairs in the basement.

"I don't have all the facts of Mr. Hartman's previous dealings. Regardless, I always believe people deserve a second chance."

"Enough with the critiques of Phil- get a life you guys!"

If it weren't so obvious he would do exactly the same shit again, then there would be no reason to critique him. He should get a life -- far, far away from the East Village.

He figured out how to sell pizza in the East Village in the 90s. Wow. What a brilliant businessman.

And he hired minimum wage immigrant laborers to staff it. Oh, but he gives pizza to community events. What a great fucking community supporter.