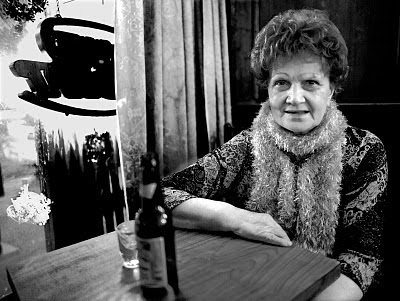 [Photo from 2010 by Bob Arihood via Neither More Nor Less]

Ludwika Mickevicius is the subject of the "Character Study" feature in the Times. You know her better, of course as the Lucy of Lucy's on Avenue A.

A quick excerpt then you can go read the whole thing...

As the East Village cleaned up around it, Lucy’s remained the prototypical dive bar: a comfortable cave bathed in low red light, with a dingy dropped ceiling and worn linoleum on the floor. One arcade game, one jukebox, two pool tables, two small drinking tables, a dozen stools and a heavy oak bar. All are steeped in the character of Ms. Mickevicius: straightforward and practical. No frills, no nonsense, no whining.

“Many people hear about me and they come in and say, ‘Lucy, don’t change anything; we like it like this,’ ” she said. “Plus, change costs a lot of money.”

Also, Lucy was the subject of a feature at the NYU Local a few weeks back... From that piece:

As for the future of Lucy’s, the hard work keeps her from thinking about the longterm. The song “Death is Not the End,” a Bob Dylan cover by Nick Cave & the Bad Seeds, eerily drones in the background. “I don’t have a plan exactly, I have no time to think about this!” She laughs. “I think some day is coming and I must think of what to do, but for now, I just work like regular, working, caring. Yeah, that’s enough, especially for me, just one woman.”

Lucy is the greatest and everyone does love her! Thanks for putting up the link to the stories and for that beautiful photo of Lucy by Bob.

Lucy is cool. Great photo by Bob Arihood of Lucy.

Thanks for this link, ev. Our big time "date night" usually meant just dropping in at Lucy's.... never needed anything more.