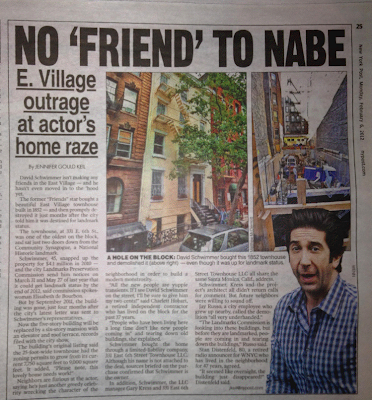 The New York Post checks in today with a story on 331 E. Sixth St., the formerly historic townhouse that we've been writing about hereabouts for the past six months.

The Post gets "sources" to confirm the David Schwimmer connection.

Schwimmer bought the home through a limited-liability company, 331 East 6th Street Townhouse LLC. Although his name is not attached to the deal, sources briefed on the purchase confirmed that Schwimmer is the owner.

Schwimmer, Kress and the project’s architect all didn’t return calls for comment. But future neighbors were willing to sound off.

“All the new people are yuppie transients. If I see David Schwimmer on the street, I’ll be sure to give him my two cents!” said Charlett Hobart, a retired independent contractor who has lived on the block for the past 37 years.

“People who have been living here a long time don’t like new people coming in” and tearing down old buildings, she explained.

One nugget from the Post story that we didn't mention first time around...

Schwimmer, 45, snapped up the property for $4.1 million in 2010 — and the city Landmarks Preservation Commission send him notices on March 31 and May 27 of last year that it could get landmark status by the end of 2012, said commission spokeswoman Elisabeth de Bourbon.

But by September 2011, the building was gone, just four months after the city’s latest letter was sent to Schwimmer’s representatives.

So, just to spell this out, Schwimmer or his people knew that the building was under landmark consideration, yet they hurried and destroyed it anyway.

Let's go back and look at the questions that we asked on Sept. 8:

We're wondering why:
• With all the available upscale townhouses on the market in the city, why did he buy this historic building only to tear it down?
• Didn't his people think tearing down this historic townhouse would raise the ire — and suspicion — of neighbors?
• What was so special about this particular location? Proximity to Indian food?
• How often will a busy person like Schwimmer actually even stay here?

Outrage over total demolition of historic East Sixth Street townhouse
Posted by Grieve at 7:03 AM

lamestream biting at your heels...

No bagels for you Ross.

They probably told him it was old, wet and falling apart, and with a shrug he believed them. Must of thought he was helping a needy community.

Schwimmer is a real prick!I hope the mad EV doorway shitter takes a liking to the new building.

"Must of thought he was helping a needy community. "
Somehow I don't think this is/was the case.

West Village: too expensive, much harder to tear down.
East Village: a marvelous wide-open real estate opportunity (specially if
you put in an indoor pool-think of the resale value!)

I'll bet you anything that after all this (highly deserved) bad publicity, Schwimmer won't even move in, knowing he'll be a pariah in the neighborhood, a symbol of all that's gone wrong here. Since he's a multimillionaire, he can afford to never move in, flip the lot/new structure, and simply move on his shitshow somewhere else entirely.

So a beautiful townhouse will have been destroyed for nothing. Mark my words.

was the house a historic landmark?
if no, he has a right to do what he wants to it.

His 'people' probably didn't even advise him of the Landmark status consideration. He likely threw money at the situation and told them to get the job done no matter what. It's believable to think he wanted know as little as possible so he could enact Probable deniability.

Once he moves in, perhaps someone could bait the sidewalk with an old mattress or two and a couple of 40's, and invite the Crusties to sit down for a spell....

Or better yet, start up an operation 'Urban Appleseed' bit..Buy a bag of crack vials from one of those shady bodegas and seed the area, and others, with little red capped beacons of joy; throw in a couple of burnt/bent spoons from the thrift store, and you are in business

Congrats to EVG for getting the scoop, but this just infuriates me more.

Yet another stupid celebrity with money to burn and no connection to the real world and how their decisions impact other people and neighborhoods.

Huh? I don't get the fuss. The previous townhouse was a shabby unattractive mess. That ugly thing isn't livable for a person of his wealth. Schwimmer's new home will be luxurious and fabulous. His home will raise property values, and the more very rich people and the less poor rent controlled leachers in the East Village the better. East Village should be more like West Village with celebrities and glamorous people.

I don't live in the East Village but I welcome him to the neighborhood!

Congrats on your new home Schwimmer!

We're wondering why:
• With all the available upscale townhouses on the market in the city, why did he buy this historic building only to tear it down?

BECAUSE MAYBE HE LIKES THIS PARTICULAR LOCATION?

• Didn't his people think tearing down this historic townhouse would raise the ire — and suspicion — of neighbors?

WHY WOULD HE CARE WHAT ANY OF THEM THINK? IF THEY LIKED THAT DUMPY "HISTORIC" HOUSE, MAYBE SOMEONE SHOULD HAVE PURCHASED IT AND RESTORED IT. FREE SOCIETY THE LAST TIME I CHECKED.

• What was so special about this particular location? Proximity to Indian food?

IS IT ANY OF YOUR BUSINESS?

• How often will a busy person like Schwimmer actually even stay here?

WHY DOES IT MATTER? RICH PEOPLE HAVE MULTIPLE HOMES AND CAN AFFORD TO OWN HOMES IN PLACES EVEN IF THEY WILL NOT BE AT THE HOMES 365 DAYS A YEAR. BEIDES, WHO TOLD YOU HE WILL NOT BE THERE FOR LONG PERIODS OF TIME? HE ISN'T A PARTICULARLY VERY BUSY ACTOR.

GET A LIFE PEOPLE.

Anonymous 1:12 - thats a great idea, TMZ and the Post will be there and come up with a story like "Friends star lives in crack infested nabe" or some other insinuating drek...or you could just set it up on youtube "Here's Friends' star new home in crack infested 6th Street". Walking to work in the morning, I see syringes in the recessed areas by the India restaurants where the junkies crash so those are also an option. Schwimmer's career is done and so someone probably advised him to do something with his savings, and it is a good time to invest if you have cash.

Bagel Guy is onto something, we need to get mainstream media to post what places David Schwimmer is banned from.

I LOVE IT! Ban him from everywhere! Except Subway and Papa Johns.

Schwimmer is an empty fucking piece of shit, I will spit in his face.

Hey Dave, you know every time you leave or enter your lovely building and you think you smell stale piss on the property? Get used to it.

@Shawn You forgot the outdoor seating at DBGB!

First he ruins the name Ross for generations of people already name Ross and now this! Shame on you, David Schwimmer!

Anon 2:11 - it's called respect for an existing neighborhood, and acclimation to same. A building that's survived for well over a century warrants preservation, as it is part of the area's historic character. To see it ripped away so carelessly, so selfishly, for a construction project that's cheap/shoddy/ugly in comparison... it's a crime. These Victorian townhouses are timeless in character - unlike the planned-obsolescence statement that Schwimmer has commissioned.

Money never equates responsibility, decency or respect. How appropriate that such a claptrap "actor" has made such a tasteless decision.

I wonder what these preservationists will think in another 100 years when these buildings are literally falling down...

He played by the same rules that prevent people from making alterations in buildings which are land-marked.

Thank you David, for making sure our city is not stuck in time. At least 1/2 of the people in the EVill now have no idea what it was like 10-20 years ago, hence their opposition to change.

This is unbelievable! That old structure was an ugly dump. It had no character. Why doesn't everyone wait to see what is actually built on this site, before jumping to conclusions? What goes up there might well be far lovelier than what it replaced. Just because something is old, doesn't mean it is worthy of preserving. And contemporary architects and designers in NY should also be making their mark on the great architectural tapestry of the city. I am a neighbor and I do not want to live in an "Ye Olden New York" mausoleum. As long as a balance of old and new is preserved, along with scale and integrity and cohesiveness of the design, I am all for it. Let's wait and see what the thing looks like before we all jump on the bandwagon like brainwashed sheep...

What a neanderthal! Schwimmer destroyed a beautiful townhouse in order to build his disgusting "mansion". He obviously doesn't care about the community since he destroyed an invaluable piece of history.