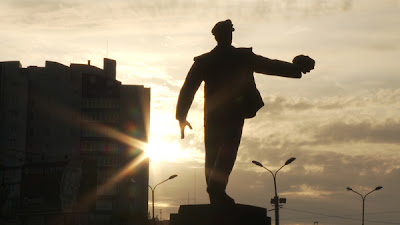 [A Soviet-era monument as seen in "The Other Chelsea"]

Kinofest NYC is a film festival that celebrates independent cinema from Ukraine and other post-Soviet countries. As the Kinofest website puts it, the festival "is organized by a grassroots group of East Villagers who have a passion for film, storytelling and the creative arts."

The third-annual festival starts tomorrow night and runs through Sunday, and will include four feature films, three of which are premiering in New York City, and 21 short films. This year's Kinofest NYC takes place at The Ukrainian Museum on East Sixth Street and Anthology Film Archives and Second Avenue at East Second Street. (Go here for schedule and ticket information.)

Festival director Andrew Kotlier answered a few questions for us via email on the eve of this year's Kinofest.

Did you foresee this becoming an annual event? How would you rate the success of the previous Kinofests?

Yes, the idea from the begining was to try to make it become an annual event, and to keep it based in the East Village, tapping into both the local arts scene and the Ukrainian community. The previous two Kinofests were quite successful, as we have been able to pull together high-quality diverse programs, involve various community sponsors and individual volunteers, and bring in a selection of qualified guest speakers. We've been seeing lots of interest and positive feedback from our audience, along with good dialogue along the way.

Do you consider this more a celebration of Ukrainian culture or independent cinema in general?

Kinofest is a celebration of independent cinema in general. Our program director [Damian Kolodiya], a Brooklyn-born East Village resident, has many contacts with filmmakers from Ukraine and other countries of the former Soviet Union. We've been very fortunate to be able to tap into that network, and through our festival to provide a new generation of "post-Soviet" filmmakers a voice here in New York City. 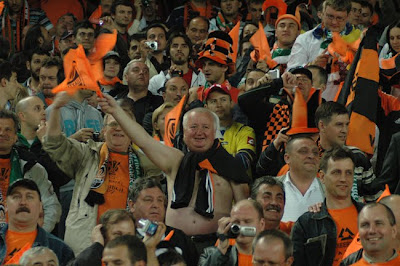 [Shakhtar Donetsk fans as seen in "The Other Chelsea"]

Tell us a little about the opening film, "The Other Chelsea," which plays Friday night at 7:30.

"The Other Chelsea" is a revealing film that explores the links between sports, business, and politics in the eastern Ukrainian city of Donetsk. It is home to Shakhtar Donetsk, the winning Ukrainian football (soccer) team, home to Ukraine's weathliest billionaire and football supporter, Rinat Akhmetov, and home base for Ukraine's president, Viktor Yanukovych. The filmmaker Jakob Preuss illustrates the social and political decline that Ukraine's new elite have entrenched in their country, and in a humorous way tells the story of the discordant worlds of increasing wealth and poverty by following two ardent Shakhtar Donetsk fans – a coal miner and well-to-do politician.

Their worlds meet in the Donetsk football stadium where, despite their differences, they are united by their strong ties to the nostalgia of their Soviet past. Preuss, who lives in Berlin, will be in New York to present his film. He's flying to the United States to take part in Kinofest, and is in the States for a two-week roadshow of his film.

What do you hope that people take away from Kinofest?

We hope people will hear and learn about perspectives and narratives from a tough part of the world that has seen a lot of transition these past two decades. We are flying in four filmmakers from Kyiv, one of whom won top prize at the 2011 Cannes Film Festival, so we also hope people will meet and mingle with our guests, and see what the new discussions and exchanges of ideas may lead to.
Posted by Grieve at 7:00 AM

Thanks so much for this information! I had no idea this event was taking place, but will definitely go now that I know. All the recent Hollywood crap doesn't seem worth spending $10 for a movie ticket, so the films brought here by Kinofest seem like a breath of fresh air.