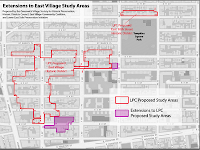 By most accounts, yesterday afternoon's public hearing about a proposed East Village/Lower East Side Historic District was spirited, if anything. DNAinfo referred to it as "contentious and packed," drawing both critics and supporters of the plan. (Read Serena Solomon's report here. The Lo-Down has coverage here.)

An article from The New York Times back in January titled Preservation Push in Bohemian Home Stirs Fear of Hardship reported on the opposition to the landmark protection. Much of the concerns were repeated yesterday by several neighborhood religious leaders.

As Curbed's Arabella Watters summarized: "Basically, no matter what the LPC decides, someone in the East Village will be pretty angry."
Posted by Grieve at 12:21 PM

14 hours later and not one snarky remark on a massive preservation effort from the EV Grieve commentariat?!?