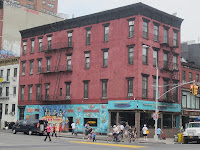 Last week, a tipster told us that Kathy Kirkpatrick was retiring and closing the Life Cafe branch in Bushwick at the end of this month... which, as we learned Tuesday via a news release, was correct...

Now, a moment for a little background ... Last spring, Kirkpatrick brought in Gallery Bar owner Darin Rubell, who is part of the team taking over the Nice Guy Eddie's space on Avenue A, to help revitalize Life Cafe on East 10th Street and Avenue B. (There is more on this at the Life Cafe blog.)

Meanwhile, there were rumors that Rubell would eventually buy the Life space. However, the 30-year-old restaurant closed last September following a long-simmering battle with dueling landlords.

So back to our tipster, who figured if Rubell bought the Nice Guy Eddie's space and is turning it into a restaurant serving "American comfort food" (which he used to describe Life Cafe's fare) ... then "it wouldn't surprise me if Nice Guy Eddie's turns out to be a new outpost for the Kathy-less Life Cafe."

ONLY speculation. But the pieces possibly appeared to be adding up to this ... especially since the Life Cafe trademark was for sale.

I asked Kirkpatrick about this possible scenario...

"Darin Rubell did not buy the trademark and therefore it's impossible for him to open a venue called Life Cafe at the former Nice Guy Eddie's space," she said via email yesterday morning.

However, she said that Rubell is one of the partners who has taken on a new lease at the soon-to-be-former Life space on 983 Flushing Ave. in Bushwick.

"The landlord expressly stated, for his own reasons, that he did not want Life Cafe in his property any longer," Kirkpatrick said of the Brooklyn location. "However, the new lease holders expressed their wish to keep the spirit of Life alive. They did not to acquire the trademark. It will not be called Life Cafe. That is, he acquired a new lease and the assets of the cafe only, not the name or concept or menu."
Posted by Grieve at 6:45 AM