As we reported Friday afternoon, emergency crews responded to a report of an accident inside 86 E. Fourth St. at Second Avenue... According to witnesses, a woman was leaving the building, and the landing on the third-floor staircase collapsed and she fell through to the next floor.

EMTs took her to a hospital. We do not know her condition at the moment.

Meanwhile, Occupy East 4th Street has more details on the accident. Yesterday, the blog noted that the following flyer appeared (after the collapse). 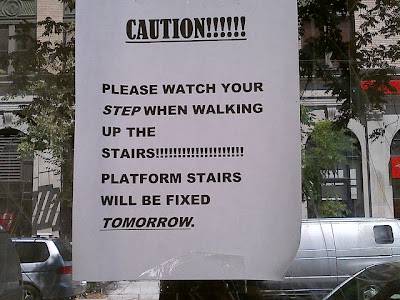 The firefighters reportedly built a temporary landing before leaving. Occupy East 4th Street had this account from a witness at the scene Friday afternoon: "The thing about this is that there were tons of cops and firemen around, but none of them were asking questions of the construction crew, unless they were doing that inside. I didn't see any workers going in or out of the building, and I'm guessing they ran as soon as the accident occurred."

As we've been reporting, RURU & Associates purchased the building last fall ... residents have said that the new owner and management — ID'd by multiple readers and tipsters as the (Oheb)Shalom family — are declining to offer new leases as current tenant leases expire.

Have other tips or photos about the situation here? Please send them our way via the EV Grieve email
Posted by Grieve at 9:39 AM