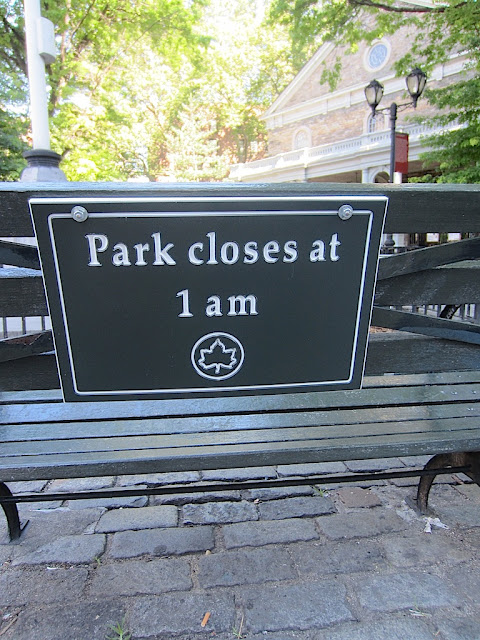 Catching up to an article in the current issue of The Villager by Lincoln Anderson titled "Crusties cross line, graffiti obscenities on East Village church."

You may have already read it. (Read the whole article here.)

Quickly... a group of crusties/travelers have been hanging out at the St. Mark's Church in-the-Bowery ... "Things came to a head [June 15] around 3 p.m. when three of the crusty punks graffitied over the church’s front with white latex paint. Using a paintbrush, in large block letters, they scrawled obscenity-laden messages on the portico’s bluestone slate floor, on walls and on statues and also on a small lion statue in Abe Lebewohl Park outside the church grounds."

Church officials called the NYPD ... and the trio hasn't been seen there since...

Winnie Varghese, the church’s rector, said that the crusties hanging out in the Park "are fewer in number, but more aggressive and troubled, in her view, than before." Because of drug use, the church has closed its public restrooms (only opening them for intermission during plays and Poetry Project performances).

However, one crusty isn’t deterred when he finds the bathroom locked. “I don’t know how to say this, he — takes a dump outside the theater,” the reverend said.

P.S.
Probably unrelated... but I did notice this recently... 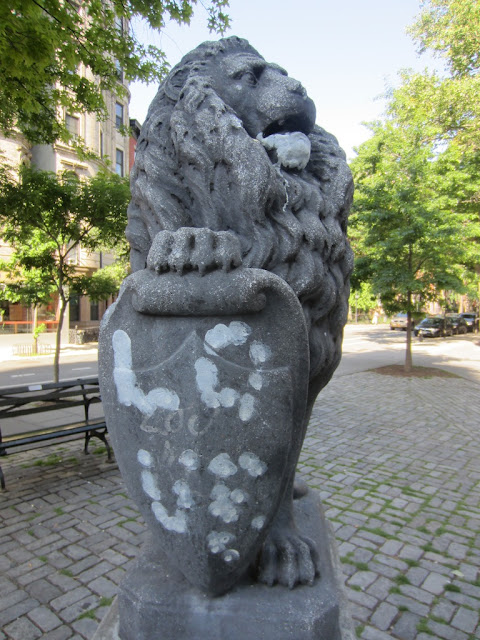 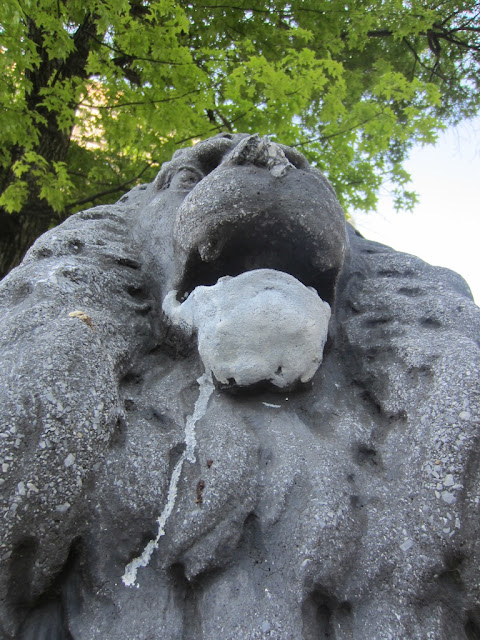 I guess the good old days of east village yesteryear are not behind us. Grieve no more, bring back the grit, went to St. Marks Church with my son and stepped in human shit. On another note, does anyone remember when someone destroyed the Apple Bank lobby on 14th street and Irving by smearing #2 all over the bank machines, walls, floor and door? Very disappointing...

At least this should settle the arguments about whether the crusties are good for the neighborhood. Pathetic.

Wait, I thought the crustybums were good for the neighborhood because they're AUTHENTIC. So much better than those horrible tax paying "yuppies" with their cleanliness, concern for safety, and respect for public property. Change is always bad! Fight to preserve the REAL East Village with its piles of human and dog shit all over the place.

I despise crusties. They are disgusting pieces of trash. They should be banned from Manhattan.

They are the disgusting pieces of trash.

Go barf and piss in the doorways at Morgan Stanley please.

Crusties are the slumming spawn of yuppies. You'd be surprised to find out how many of them are from Connecticut.

Sorry but if they were so "punk" and counter culture, they'd be taking dumps on the 7-11 and Subways and not one of the oldest and most active churches in the community.

@Anon 10:29 I agree 100%. The NYPD turns thousands of blind eyes on the weekends. The dress shirt, jeans and boat shoe financial fucks and their TJ Max adorned scags make more noise, have NO problem urinating on the very busy Second Avenue, tipping over trash cans, etc. and I NEVER, EVER see any police.

The fraudster bankers are the worst.

A crying shame. These barbarians bring no "authenticity" to the neighborhood. Their behavior speaks louder than words, in how they treat the treasures of this community and the EV.

They're junkies and obviously mentally ill, what do you expect? Check out the scaffolding at 2nd and 6th street sometime in the morning when they've been pushed off by the cops, they leave a mess behind them, every single day. But the rapist frat crowd is equally repulsive and mentally ill.

They're outside the Starbucks on 2nd Avenue and 9th Street vomiting on the curb right now.

Does everyone truly believe that all NYU alumnus are the same? The university turns out thousands of graduates every year, but you're right - they are all living off mommy and daddy, sent to destroy the east village with their vomit and urine and "raping?".

As an east village resident and an NYU alum, I'm growing quite tired of all this stereotyping. But back to the crusties, saw one shooting up and another pissing in my vestibule this week, but I'm worse because I chose to attend NYU?

Just want to point out that not all of the "crusties" are the same. I have met a few who seemed quite decent (though IMNSHO misguided in their lifestyle). There are individuals both good and bad in pretty much all groups.

Sad, narrow-minded comments here that show that this once-great neighborhood is now filled with narrow-minded dullards from suburbia who want everyone to look and act exactly like them.

Not every so-called crusty is a drug user just like every man in pleated shorts and a flipped baseball cap doesn't work for Goldman Sachs.

to preface this i'm a 25 y/o yuppie who is from the city and has lived in the EV for 5 years.. I can't believe you would turn this into an irrelevant argument against banking houses. I hate banks too.. but because you hate banks doesn't make crusty punks worth living..

they vandalized st. marks church! not one of the 2 chase branches on 2nd ave ( 10th/st. marks) within 2 blocks.. evan among churches it would have been more effective if they trashed that evangelical place next to the Christodora House..

Honestly,there's a few of them that are actually decent, but for the most part the rest of them are really a waste of life. They make a mess all through out the east village, they think they can do whatever they want in our neighborhood (which frankly really bothers me) They shoot up drugs everywhere, they stink, dont shower. There is NO way you can feel bad for them, For the most party every single one of them have chose this life. They CHOOSE to live on street. I just dont get it. They just need to be banned from the EV.

NOBODY SHOULD BE BANNESHMUCK D FROM ANYWHERE IN NYC, THATS WHAT IT'S ALL ABOUt,NYC SHOULD BE OPEN TO ANYONE and EVERYONE. BACK IN THE 90's WHEN I WAS CONSIDERED A "GUTTER PUNK" YOU COULD STILL FIND O ROOM in THE EV for 75$ a wEEK! or A SQUAT. NOBODY CHOOSES TO LIVE ON THE STREET, THATS THE STUPIDEST COMMENT EVER! EV JUST ISN'T ACCESSIBLE TO THE YOUNG ANYMORE , UNLESS YOUR PARENTS GOT YER BACK, YOU SPOILED SELF ENTITLED ARROGANT SHMUCK, ALL NYU REQUIRES IS $ ,obviously not smarts!