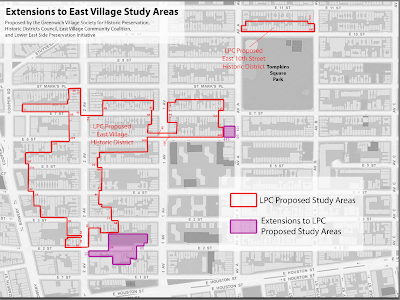 This afternoon is the long-awaited public hearing with the Landmarks Preservation Commission on the proposed East Village/Lower East Side Historic District.

You can find the background information here via the Greenwich Village Society for Historic Preservation, who along with other organizations, have been working to document the neighborhood's historical significance.

Per the GVSHP website, "The proposed district is far and away the largest expansion of landmark protections ever considered in the East Village." The GVSHP also has photos here of some of the significant buildings in the proposed historic district.

Meanwhile, for an opposing view, Rob at Save the Lower East Side! doesn't support the landmarking. He lays out his four reasons in a post from earlier this month ... You can read his arguments here.

He also talks about how the housing market is forcing out "anyone who is devoted to the life of the mind or the creation of cultural products." And an excerpt:

Who remains? Increasingly the wealthy devoted to the life of consumption. The city is gradually becoming a monoculture of nightlife augmented by tourism, a huge nightclub for the rich and their gawkers and their servants. There is nothing in that economy that guarantees a place for the arts or intellectualism beyond the elite artists and elite intellectuals. We've seen it already in the East Village.

Info: The Landmarks Preservation Commission hearing room, One Centre Street (at Chambers Street), 9th floor
Posted by Grieve at 6:50 AM

What frightens me about this whole landmarking business is I have a feeling developers are going to go after the non landmarked properties with more intensity.