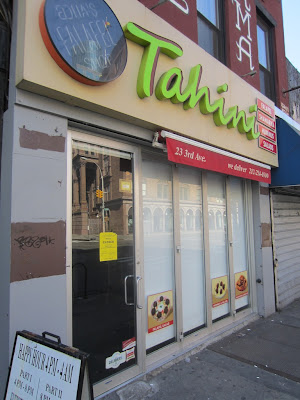 Back on June 1, the DOH temporarily shuttered Tahini on Third Avenue at St. Mark's Place. According to DOH records, the city issued 79 violation points, including for:


• Hand washing facility not provided in or near food preparation area and toilet room. Hot and cold running water at adequate pressure to enable cleanliness of employees not provided at facility. Soap and an acceptable hand-drying device not provided.
• Food not protected from potential source of contamination during storage, preparation, transportation, display or service

The restaurant never reopened.... and this morning, we spotted workers cleaning out the space... 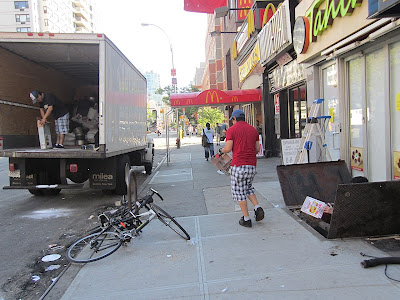 The supervisor confirmed that Tahini was closed for good.

As you may recall, back in January, Eater reported that Michael "Bao" Huynh was taking over the Tahini space ... and opening an "Old School Style Philly" cheesesteak place called — Mikey's Cheese Steak. However, the Tahini owners followed up later saying that they had no plans to close.

Perhaps the new Bao concept is back in play then.
Posted by Grieve at 10:57 AM

I liked this place when it was the original Chickpea. It was quite good for those first few months. Then after the name change it was never quite the same and I stopped going altogether.

I liked this place when it was St. Mark's Pizza

They had a hand washing area for customers outside the toilet which, as a customer, I thought was great. I guess the health dept thought it too much that the employees might use this.

St. Mark's Pizza! How could I forget! Great place. Tahini was convenient but I also thought the quality had gone downhill after the Chickpea transition. At least Mamoun's is right around the corner.