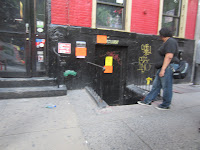 During a walk by Lucky Cheng's last night... people were checking out the DOH sticker on the basement door here on First Avenue... According to the DOH, the city issued 79 violation points, including for the usual "evidence" of things as well as for a variety of flies...

As Grub Street reported a few weeks back, Lucky Cheng's will relocate to 240 W. 52nd St. when the new space is ready... here's the listing for the First Avenue space.

Back in April, owner Hayne Suthon told us that they'd hope to move in mid-July, though that timetable wasn't a definite.

Updated 10:44 a.m.
Suthon responded to our email... She says that the inspector arrived Wednesday afternoon, after the space had been closed since Saturday night... and while the bar-restaurant was not open yet for business.

"We do our DOH walkthrough every night a little over an hour before we open, with a manager and kitchen manager," she said via email. "[The inspector] just walked in because the door happened to be open. The manager was not even there, the kitchen guys just recently arrived, the porters just started cleaning."

Suthon also takes exception with elements of the report; that some of what was in the report is wrong, such as the time element of the inspection.

"Interesting time warp. I think he realized into the inspection that we were neither open nor even close to opening ... If he had come in when we were open, the porters would had fully cleaned, we would have done our DOH nightly walkthrough — this would not have happened."

In any event, she said that "we fixed what we needed to fix." And she expects to be back open as usual tonight.
Posted by Grieve at 6:43 AM

I expect a lot of confused Asian Drag Queens on the streets of the LES.

whatever is a DOH nightly walk through?

lol health department inspections are one of the biggest scams going, big money maker for the city, all they do is send a bunch of ignorant black kids fresh out of community college (I like to call them bloomberg's black mafia because of 95% of them are black) to just blanket poor small businesses with any kind of violation they can think of with the hope a few of them will stick to get some money, comical the they post right away on internet that they gave Chang has 79 point before they even gone to the circus food court to allow Chang's to defend themselves...oh yeah "guilty until proven innocent" is the DoH motto..and everybody gets an A, as long as they pay for it.