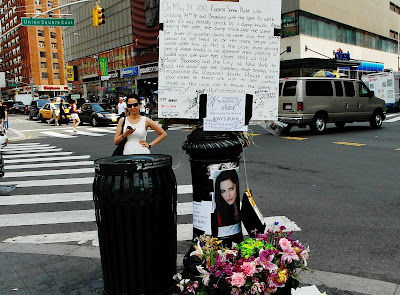 [Bobby Williams...click on image to enlarge]

Roxana Sorina Buta was returning to her East Harlem home from her job as a waitress at Bar 6 on Sixth Avenue and 13th Street on May 24. She was reportedly crossing Broadway at East 14th Street when a dump truck struck and killed her. She would have been 22 last Thursday.

According to DNAinfo, Buta's family's lawyer, Joseph Tacopina, said police are questioning a Department of Transportation driver about the hit-and-run.

Per Tacopina: "They're still investigating and determining whether to charge [the driver] with a crime or not. The city is being incredibly derelict in resolving this issue."

Said Roxana's mother, Cristina Oprea, of her only child: "Nothing will bring me peace ever again. I need justice for my daughter."
Posted by Grieve at 8:18 PM

RIP..very sad..could happen to anyone. It is dangerous crossing some streets and avenues. I am always glad there is a crossing guard or police on hand.

This petition is calling for justice for the death of my sister and best friend, Roxana Sorina Buta. On Thursday, May 24th, 2012 Roxi was killed in a hit and run while crossing with the light to walk on 14th and Broadway by a Department of Transportation garbage truck. The police have identified the driver but no arrest has been made. Why? Hit and runs are not considered serious crimes and drivers get away with murder all the time. The city's negligence, in particular, is shameful when it comes to vehicle-related deaths. As long as a driver says he/she didn't see the person, they are only charged with a misdemeanor, and more often than not released without so much as a fine. Roxi was killed in a hit and run by a Department of Transportation driver who so far faces no charges and is claiming that he did not see Roxi as he hit her head on, or the many people who screamed and chased after him. If this is the case, then driving one of these trucks is no different than shooting a loaded gun with your eyes closed. This has to change. Please sign to ask Mayor Bloomberg and NYPD Commissioner Ray Kelly to treat this, and all other hit and runs, as manslaughter. We already have over 1,500 signatures at Roxi's memorial in Union Square, help us reach 10,000!