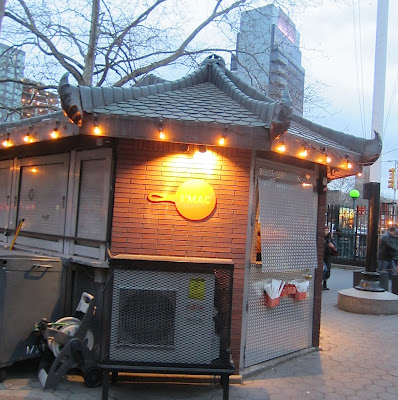 News came down last week that S'MAC had closed its satellite operation at First Park after nearly 18 months at the location off of East Houston and East First Street. S'MAC took over for Veselka at the kiosk in January 2012.

We reached out to Caesar Ekya, who owns and operates S'MAC with his wife Sarita, for more details about the decision and the future at First Park.

On running the kiosk:

"We had high hopes for it. It is such a lovely park and neighborhood, and we felt that it would be great to be part of it and help develop it into something better.

But the sales didn't materialize and we ended up losing money there every week that we were open. We tried different formats, timings, product mix, even started delivering, but were not able to raise sales to a break-even number.

We still have more ideas for it and more things on our list to try but then, in the past few months, two things happened that made us decide to give it up. One was the opening of the Murray Hill location and the other was the Health Department mandated closure of the East Village original.

With those two events we realized that we needed to bring our focus back to the two locations that we know work and are profitable, and so the decision to close became inevitable."

On the future at First Park:

"We still feel very sad having to close the kiosk. We feel it has a lot of potential for the right vendor and are working with the Parks Department to find someone who can turn into the neighbor it can be.

If we terminate our lease and walk away, then it will go back to a bidding process and will remain closed for the next 6-9 months. So our preference is to try and find someone to assign the lease to. We have talked to a lot of the neighborhood businesses already, especially coffee shops, and there are some potentials in the pipeline. Hopefully, we will know for sure in the next 2-3 weeks."


The S'MAC locations on East 12th Street and in Murray Hill remain open.
Posted by Grieve at 6:00 AM

So will the park be open? City seems to love to shut that little space down, they put up some serious metal fencing around it, what kind of assholes feel the need to fence off that square so people can't use it?

Wasn't this the place that asked people to buy some kind of gift card thing so they could meet their expenses, like paying staff, after Sandy hit? Wonder how that turned out?

I think the park just isn't appealing enough of a space (and too often with sketchy hangers) for it to be seen a s nice space to hang and maybe eat, or even buy food to go. Unfortunately. I know I wouldn't want to sit and chow down there. It needs a re-design.

no visibility to street: fail

There shouldn't be any business operating out of a public park.

With all the traffic whizzing by on Houston, I just don't feel comfortable or relaxed sitting in this park. It's not a great location for an outdoor food businesses.

They shouldn't have been there in the first place. So many places where one can get a snack or drink in the vicinity and just take it to the park. Olus, whenever a business is in that park, the park closes whenever that business is closed. It's a public park.

I disagree with much of the above, having spent many Saturday and Sunday mornings drinking coffee and eating a sandwich at this very location. The seating area, tables and umbrellas, all very pleasant. Could it be that macaroni and cheese is not something you want to drop by and pick up on your way to the subway? Coffee shop food (like in the past) would be great.

The first gal couple who opened in that place rocked.
Best tomato basil soup (w/ Sullivan st bread) I've ever had, and great muffins and coffee.
Was sad when they left. But it was then taken over by a (I think) Italian guy. Also made really great stuff. Wonderful Panini.
After he left, everything else that came in there just sucked.

Patrick might have a point about the menu. If I want to grab a quick bite in the park, I don't think macaroni and cheese. I think a sandwich or a muffin and a beverage.

Unless I'm at home (and really depressed), I don't ever think about macaroni and cheese.

I agree with Patrick. But really, when I pass that kiosk, I want to walk up and rent horseshoes, ping-pong paddles, badminton equip, or checkers, etc. Why isn't this a rental hut for lil' things you can do in such a small park?

I really love to eat mac and cheese from a container that I balance on my lap while sitting on a park bench.

The idea never made sense to me.

But, I do hope something goes in here and soon. Perfect iced coffee grab spot.

Geez, are the folks in the EV this spoiled that they can't grab something from the many "eateries" around this park that they have to be literally in front of them to be had hand in foot?

If you spoiled brats want something here, then let it be something affordable and not only the few can have. And if they have another business here, have the park open during public park hours, and not closed when the business is closed.

I agree with Patrick,
The problem with this place was the menu. I live around the corner and spent many afternoons sitting in one of the lovely tables with umbrellas having a coffee and a sandwich back when this was a french cafe. Then Veselka came in and ruined it. Nobody wanted to have pieroges and blintzes in a cafe in a park on a lazy summer afternoon. That was a total fail. Then came S'mac. As much as I know people love these guys, it was clear to me this was also not a good idea, for the same reason. People go here for a breakfast or lunchtime snack, or for an afternoon indulgent treat. They also stop in on the way to the subway for a quick coffee and snack for the commute. The French place had the perfect menu for all of these customers, and seemed to always have good business. There was always a line in the mornings for takeaway, and most of the tables were full at lunchtime. I wonder what happened with them. As for business is parks, I am all for them if they are local mom and pop places and not national fast food chains. NYC parks should provide civilized amenities for those of us whose idea of what a park is, does not come from camping in tents or football games in suburban fields....

I think it's a great location for coffee/muffin or egg sandwich and newspaper in the morning. A great, lively people-watching spot. It's not really about the food (though mac and cheese seems like a terrible choice) but sitting at a table whiling away some time and watching the passing parade of humanity. I always found early mornings (weekdays, specifically) more pleasant there than afternoons. Veselka was perfect for that spot. Maybe now that their 1st street location has shuttered, they'll consider re-opening the kiosk.

One of the problems was that the hospitality was not on-point here.

I used to stop by every morning to get coffee. I never got a smile from the staff...they seemed annoyed to have to serve me. Also, they never remembered my coffee order or thanked me when I tipped them.

They should have diversified there menu for this location. Possibly offering breakfast offerings or sandwiches. But when you fail at the most basic thing which is customer service (especially to a commuter crowd which could give you lots of repeat business), then you are really doomed.

I live on 1st Ave, above Lil Frankies. stnick has it spot on - these guys weren't very friendly. I used to order on seamless and/or their website and it wasn't even pleasant to pick up the order, which is sad. I guess if you're not doing too hot as a business, life is no fun.

Regardless, I'm looking forward to a neighborhood vendor who's a little more neighborly!