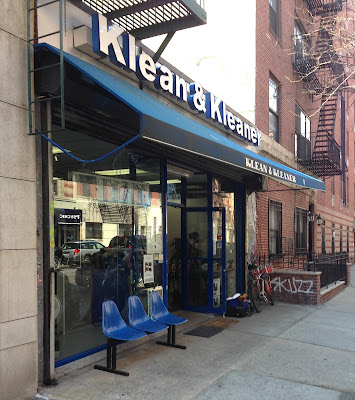 As we reported last September, Klean & Kleaner, the laundromat at 173 E. Second St. between Avenue A and Avenue B, was on the market for use as a bar or restaurant.

Off and on during the last few months, we heard that the laundromat was closing very soon... On April 30, we thought the end was here. "They were loading trucks all afternoon. Wouldn't let me drop off clothes unless I was ok picking up in '2-3 days' at an undefined location," said one neighbor.

However, they remained open through this past weekend. Staff was there yesterday for customers to pick up their laundry. There was a sign noting that the washers were out of service. (Someone had removed the doors to the washers.)

Meanwhile, EVG Facebook friend Edward Arrocha took these photos in late April. "They are devastated," he said of the staff. "I will miss them." 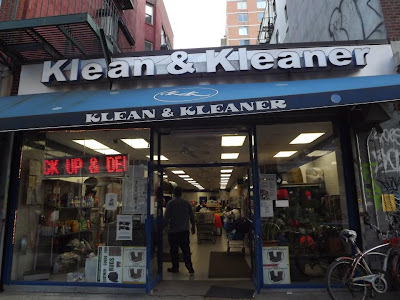 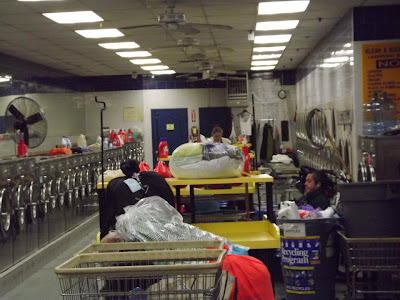 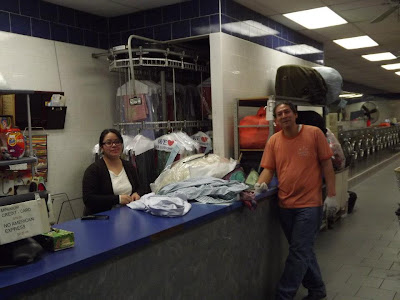 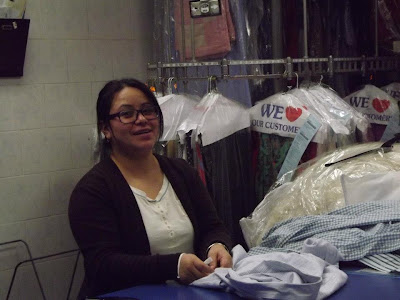 Word is the landlord is now asking $18,000 a month in rent. As previously reported, the owners of the Living Room on Ludlow Street were hoping to take over this space, though the CB3/SLA committee turned down that proposal in May. 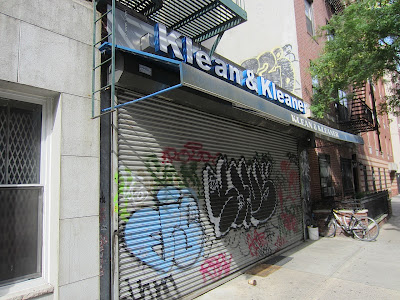 Previously.
Posted by Grieve at 6:10 AM

Email ThisBlogThis!Share to TwitterShare to FacebookShare to Pinterest
Labels: Klean and Kleaner, laundromats, the Living Room

This space would be ideal for a Chase Branch. We need a few more of those down here.

Another sad day, time for its patrons to call council members and the speaker's office (and the public advocate?) and remind them that most of the older rental buildings do not have laundry facilities...and that the EV really does not need another liquor lic. restaurant as much as it needs to keep up with the bedbug issue. You know, that clean sheets and clothing help to prevent...

I had my laundry done there (lazy of me I know) and the staff was so nice. The two brother Gregorio and Geronimo who picked up and delivered my laundry were the sweetest and most hard working guys I know! I will miss them!

i don't see any real efforts to protect commercial tenants.
many years ago there was the small business task force led by then councilmember ruth messinger.
although there was a lot of pressure to do something - anything - the city said the state had to pass enabling legislation first and the state said the city had to pass it first.
today cb3 is studying the problem with a committee to retain business or something like that.
the only things that have changed are: there are less long-time, family, neighborhood stores; and the rents have gone way way up.

Another reminder that Landlord greed can bring about"Potterville' results remedy this situation with a direct property tax surcharge for new bar's in neighborhood that can not be passed on to Bar owners or patrons. This will at least reduce some of their profit taking at the expense of a social contact to the neighborhood normally I do not favor these tactics but here I make the exception

bkllue glass is right. I know we're in a holding pattern as long as Bloomberg is still mayor, but once he's gone the issue of rental affordability, both residential and commercial, needs to be relentlessly lobbied for in Albany by our next mayor.

Neighborhoods become unlivable/unworkable without essential services like laundries.
San Fransisco put anti-chain store regs into place to maintain neighborhood character and to keep rents reasonable. It could work here and I believe a number of community boards are looking into it.

I await all the furious emails telling us how many, many dry cleaners still exist in the EV, and how it's perfectly OK that yet another one has closed in favor of a froyo/nail salon/bar/restaurant that no one without a trust fund can afford.

why are ubiquitous dry cleaners any less nauseating than fro yo. fro yo's use fewer pollutants.

The regulations in San Francisco do not stop rents from going up. The areas where these regulations exist are still unaffordable.

This is really sad. I've been using Klean & Kleaner for years. The last few weeks they had gone cash-only, which is often a sign of the end. Having to only lug laundry a block or two was a huge convenience and I know a lot older neighbors appreciated how close they were as well. If it becomes a Sleepy's we can stage a lay-in.

Just keep protesting 7-11, the booze toxicians will get what they want. The next mayor has already been decided, it will make bloomie look good.

$18000 lol a month rent pretty much limits that place to a corporate tenent or an all out bar pumping out tons of drinks to pay for that. I cant think of any other kind business that can afford those kind of numbers out of that small space, pretty sure it will sit empty for a long time, feel bad for the cleaners, wish them luck in rebuilding/relocating.

NOOOOOOOOO! Man. I've been using this place for years. They are some of the nicest people to deal with. Always so kind on the phone and in person. This is really a bummer to say the least. No wonder no one was picking up the phone there today. Ugh. This really sucks. I wish there was a way to help people like this stay in the neighborhood and keep the 500th frozen yogurt spot from opening up here. Sure there are lots of places to do laundry in the EV, but not always one like this where people are so nice on a regular basis. They will be missed.

There are a number of good reasons to limit the number of chain stores in neighborhoods as San Fran has done. One is because chain stores drive up landlord expectations about what they can charge for commercial rents. That can make it too $$$ for locally owned businesses. Do you think allowing chains en masse into the San Fran neighborhoods you reference are gonna lower rents, shmnyc?

The LES is becoming more like the Upper East Side everyday, thank goa'uld for rent control.
I always wonder if places like Baczinsky's and Moishes are the owners of the building as well of their respective business...

Ken,
I don't see these laws as a solution to the problem -- I don't even think they're meant to be-- they're meant to advance the economic interests of small businesses. A real program of affordable housing and neighborhood use would have to abolish market relations entirely.

Unregulated, the market declines to the Walmart monopolization model, ending both market relations and any semblance of participatory government. Too big to fail, the giant holds the economy hostage.
http://www.rawstory.com/rs/2013/07/09/living-wage-mandate-in-d-c-sends-walmart-running/