The Wafels & Dinges café is now open on Avenue B 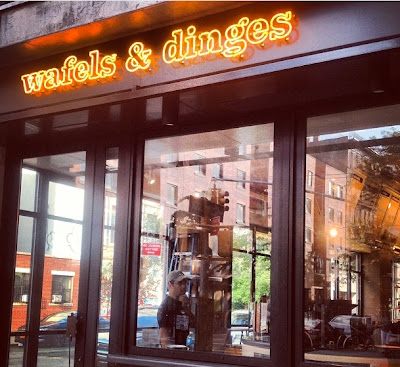 The first Wafels & Dinges outpost is now open on Avenue B and East Second Street... the café is based on the same concept as the popular food trucks in circulation around the city ...

W&D founder Thomas DeGeest, an East Village resident, told us back in January that the store was "progressing at turtle speed." He also noted that it "will be as much a good coffee place as a waffle and ice cream place."

Previously on EV Grieve:
Is Wafels & Dinges opening a café on Second Street and Avenue B?

Wafels & Dinges hoping for a spring opening on Avenue B
Posted by Grieve at 11:55 AM

Email ThisBlogThis!Share to TwitterShare to FacebookShare to Pinterest
Labels: Wafels and Dinges

Gonna have to stop by. Even though I'm not a regular customer of the truck, I'm excited for these guys.

Wait, they opened a restaurant without a Kickstarter beg-a-thon campaign, a hipster-packed viral video, or a secret flaky-biscuit recipe, right here in the East Village? Can somebody please explain?

Ça plane pour moi!
(There's no end of song references for this thing!)

No Kickstarter, biscuits or fro-yo on a hoof! Shocking!

The Dinge ate my baby!