A moment in the ongoing East Houston Reconstruction Project

As the East Houston Reconstruction project creeps along, already three years behind schedule, EVG reader EV Rob says that he was getting tired of seeing the new medians as well as the East First Street pedestrian plaza filled with weeds and trash.

"I check the weekly bulletin they issue just to see what's coming. They listed those weed-ridden plots as accomplishments," EV Rob wrote us in an email.

And he wondered why the center medians from the Bowery to Sixth Avenue are usually maintained and manicured ... yet those from FDR to First Avenue are overgrown with weeds as tall as 6 feet in a few spots... 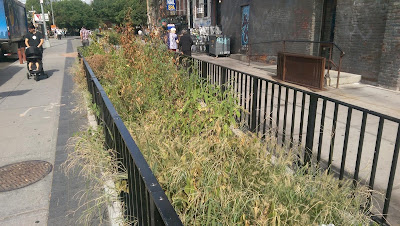 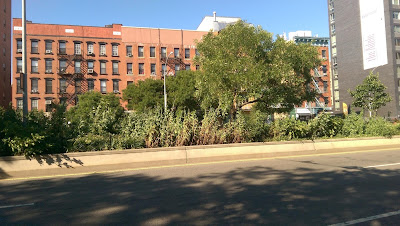 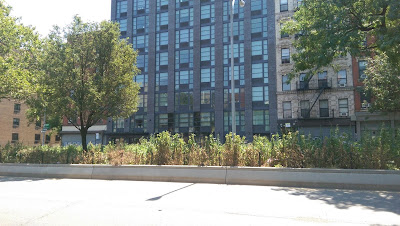 So EV Rob sent an email last Thursday to the project's community rep... Not only did Rob receive a response that day, he also saw that on Friday a crew started cleaning up the Greenstreets pedestrian plaza outside Punjabi Deli ... 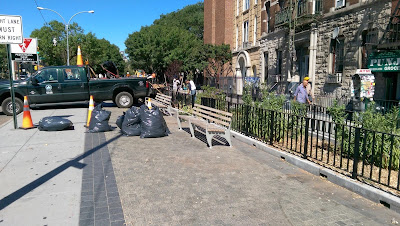 The rep offered an apology and said that the DDC would clean up the medians "then turn them over to the Parks Department for all future maintenance."

EV Rob said that was impressed that someone got back to him... and took action.

Meanwhile! There was talk that the whole project might be wrapping up this month. However, DNAinfo reports that there is now a further delay in the the already-prolonged project. Spring 2017 is the new completion date.

The DDC has been reconstructing/replacing combined sewers, trunk main, water mains, catch basins, fire hydrants, sidewalks, etc., etc., along East Houston Street, from the Bowery to the FDR Drive. This work phase started in June 2010, when the Lakers beat the Celtics to win their 16th NBA Championship and "Jonah Hex" was playing in theaters.

It's definitely a start. Looks better. My concern is the corner of 7th and 2nd Avenue. I realize the smaller lot where the explosion occurred had their weeds removed. But what about the weeds on the lot next to the sidewalk? Those weeds have amassed into such a large size, it is impossible to walk on the sidewalk. Most of the weeds are growing under and around the fence. The inside of the lot is starting to resemble a tropical forrest. What is the city doing about that? I realize there are two graves there for those fallen young men, which I am not even certain if they are real graves, but why can't someone go in and remove the weeds? Its looks hideous. If someone does nothing, it will only look worse. If I called 311, would they provide any information surrounding whom is in charge? As a community, how can we do something to make it look better?

Kudos to Rob for stepping up and actually doing something about a blight on the neighborhood. But the fact remains that this whole project and many others around the city are a trough for the building trades and contractors and we're paying for it all... the delays, the inconveniences and the second rate work and design ideas.

What's wrong with the weeds ? It's green, it's natural. How can it bother anybody to see an empty lot covered with nature ?

@12:33pm: The site of the building fire/collapse is privately owned. The OWNER should be cleaning it up, but do you really expect that to happen?

@1:20pm: EXACTLY! NYC is the center of the full-employment-forever-for- construction-workers universe. Here's my take: It's abundantly clear that nobody in NYC government gives a rat's rear end about ANYTHING getting done on time, at or under budget, and correctly. But hey, if they did it right the first time, those workers wouldn't get hired again to fix it soon afterwards, right? And then there'd be tons of unemployed construction workers, who wouldn't vote the way they're supposed to vote.

Because fucking pillager businesses like BOULTON & WATT have no sense of community or pride in their surroundings. They should be cleaning that thing every day, it's right outside their restaurant!