A patient visit to the medical marijuana dispensary on 14th Street 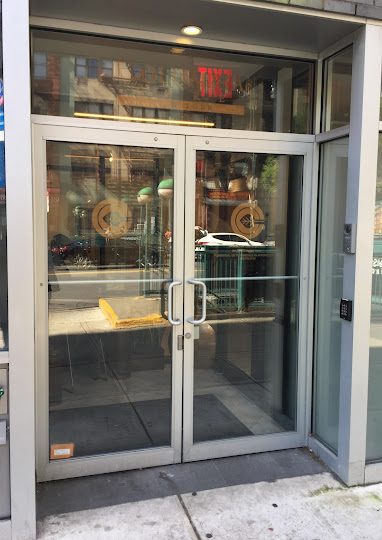 Written by an EV Grieve regular who wishes to remain anonymous

I had the opportunity to visit Columbia Care on East 14th Street last week as a patient.

First, I had to get a recommendation from a doctor and then use that to apply for a medical marijuana card from the New York State Department of Health to schedule an appointment with Columbia Care.

The doctor I visited had to be registered with the New York State Department of Health as a prescriber of medical marijuana. His office looked like a typical therapist's office. He saw me and, after reviewing my medical records and a consultation with his assistant (a marijuana expert from California, she told me), he gave me his recommendation on a form that he registered with the state while we chatted.

His office visit fee of $200 was paid on a Square attachment to his iPhone by debit card. The card from New York State cost $50 and they said they would bill me for it. The doctor's appointment was not covered by health insurance.

The Columbia Care facility, which opened in early January, is on 14th Street between Second Avenue and Third Avenue. You must get buzzed in to the facility. A security guard sits inside the front door. He asked to see my ID card. After I showed it to him and mentioned my appointment, he turned to a small window where the receptionist sits and told him my name. They granted me access into the vestibule, and then through one more door.

The reception area is a soft white-light environment not unlike the waiting room for a high-tech spa complete with similar lighting and pleasing background music. 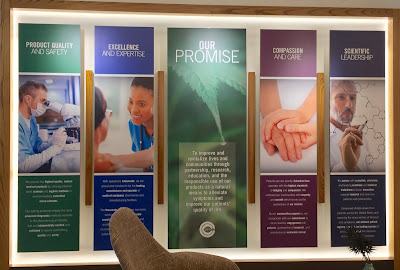 I was a little early so I took a seat. Right at my scheduled time, a pharmacist in a white lab-style coat came out of the back room and led me into the actual dispensary.

The dispensary was similarly lit, but it looked like a high-tech eyeglass store with glass display counters on one side. We continued past all this into an area that was labeled "patient consultation room." Here was a small conference room with a table and four chairs. It was very businesslike.

She sat down on the opposite side of the table from me and consulted my records. She then proceeded to ask me a few follow-up questions related to my experience with using marijuana and what type of medications I was taking at the time for the conditions that I was trying to treat. Then she told me about the product — what I was there to find out about. The big reveal!

The pharmacist said that they produced two different types of products: one was a tincture, which is an alcohol-based soluble mixture with marijuana that you put underneath your tongue. The other is a type of concentrated oil in a capsule that you use in a vapor pen.

The third type of product, pills or capsules filled with the marijuana, which is legal in New York State, is not currently available at Columbia. There isn't any smokeable or edible marijuana of any kind for sale.

So based on my medical records and what I told her, she recommended that I try the second mixed type in the vapor oil pen format. She then demonstrated how to use the vapor pen and how often to use it (three times a day to start).

As health insurance does not cover the costs medical marijuana, I had to pay out of pocket. She told me that one capsule would be $100 and it would be around 90 puffs (4ml). At her recommendation of three puffs per day, this would be a one-month supply. This price seemed expensive to me based on previous quotes I have seen for this type of medical marijuana product in California and Colorado. However, I figured I would try it out because I got this far.

With the battery pack, the final price was $110. She brought me back into the dispensary, where I received my product in what turned out to be hard-to-open containers. The counter person gave me final instructions on how to use the product and also told me "don't freak out if the pen doesn't work or stops working — that probably just means that you need to charge the battery." 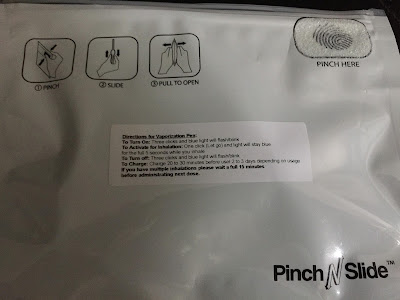 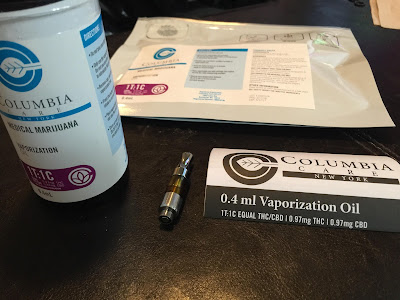 Upon returning home, I sorted through all the packaging and read over the directions. Then I charged up the battery and away I went. I must say that the medicine there is a quality product, and it did have a positive impact on the medical conditions that I am treating.

Regardless, I do feel that the price at Columbia Care is too steep based on other comparisons of similar products. Makes sense — there isn't any competition. Columbia Care is the only dispensary in Manhattan at this time, and New York State made the start-up cost prohibitively expensive with ridiculous restrictions.

In any event, I had a good experience and I hope that this opening of the door into medical marijuana will progress down the line similar to California, where recreational use is on the ballot this year.
Posted by Grieve at 4:30 AM

"You must get buzzed in to the facility"

There must be a joke there somewhere?

Hey, thanks to the writer and EV for publishing this interesting narrative. I don't have any need for it at this time but have been curious about how it works. As far as insurance, my guess is that as long as pot is federally illegal the insurers won't cover it.

Glad the medication is accessible but just a business here, buy something for $1 sell it for $2, state gets its tax. Those pen capsules can be $30-$50 with your average delivery service. Viva la underground!!!

Mr. Orwell could have incorporated this into a book....

Just another day in New York City = Havana on the Hudson

Can't wait for a few years when it's totally legal. The hoops these folks have to jump through is insane. Talk about government and big interests colluding to undermine competition to big pharma and to alcohol.

All this for fucking marijuana when right down the street people can (and do) get dangerously incapacitated with alcohol on a daily basis.

I can't wait either when it becomes fully legal. For now, the way it is dispensed, it doesn't seem effective. I am a forty something gay man living with HIV here in the east village. Thankfully, I am undetectable, healthy and stable. However, there are slight side effects with nausea and fatigue that stem from the virus and the medication I am on. Since I medically quality, it is good to know there are options to mitigate the symptoms. But New York State needs to elevate its policies such Colorado, Oregon, and Washington State and DC. When will this happen? Hopefully soon.

Thank you for sharing this..I was curious about it.

Not sure I'd prefer this song and dance to my trusty delivery service guy.

Thanks for printing this, Grieve. I've never known anything about this process, and it's quite interesting to read about it. And I hope the anonymous author is feeling better.

Um, why should they get it for free? Money doesn't grow on trees.

Dave's not there, man.

When Pope Mickey, was around he would pass out the green to those who really needed it

Sucks that NY state has it this way. I live in CA. And it's a total joy to get a marijuana recomendation and to go to a dispensary and peruse all the different edibles, flowers, oils, wax, etc. thanks for the story

This is designed to fail. It makes patients go through unnecessary and sadistic hurdles to get it and it's an inferior product, when the primo stuff is still out there, and has historically worked better in plant form. All these years losing the drug war has not educated our part time, overpaid, inefficient, and greedy elected servants not a bit.

President Barack Hussein Obama, before he bails and becomes a venture capital partner billionaire somewhere, has to issue an executive order to finally and legitimately legalizing cannibus once and for all. If he can make Stonewall a national monument, which to a lot of people are vehemently against that and LBGT people in general, then this should be a piece of cake. And it won't be much of a challenge

It is just stupid not to insure this if it's medicinal, while oxyconten and ritalin has been out there frying brain cells for decades. Sadistic, Byzantine bullshit.

I agree with the some of the commenters. CA has nothing on NY state in regards to 420. Seriously. When will Congress get off their lazy asses and do something? What we have now here is pitiful. I know a few who are battling serious illnesses. They could benefit from a trove of options like those in other states. How do we do something as citizens to up the cause? Just curious.

Very cool. As usual, more real journalism at Evgrieve than, well, elsewhere. (I will not be surprised when we see street-level first person reports about medical pot in the NYT and the 'loids.)

Is my math wrong? It's roughly $400 in out of pocket expenses to get a month's worth of medical pot? That price drops to $150 a month or so after the first month? Do you need to go back for a check up monthly? New prescription monthly?

I considered this option to treat pain for degenerative disc disease. Thing is, NY State is extremely restrictive about the condition for which MM may be prescribed, NONE of its covered by insurance, and it's very expensive. Better to find a good dealer.

I need a good dealer and can't find one..only sleazy set up people with bad weed. Where do you find doctors who can assess the need for treatment????