At the new location of Ess-A-Bagel 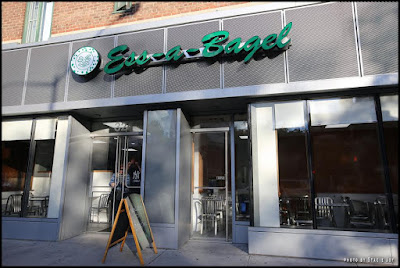 As we first noted this past weekend, the new location of Ess-A-Bagel opened at 324-326 First Ave. near East 19th Street in Stuy Town. 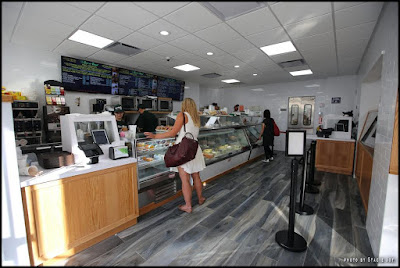 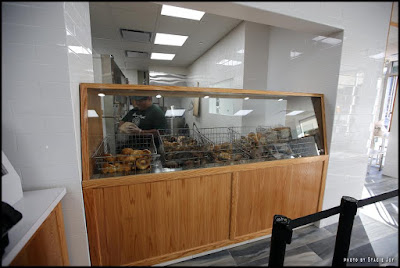 ...and as previously noted, Ess-A-Bagel will now toast your bagel. (The old Ess-A-Bagel on First Avenue at 21st Street sported "No Toasting" signs.) You can spot the toaster behind the counter... 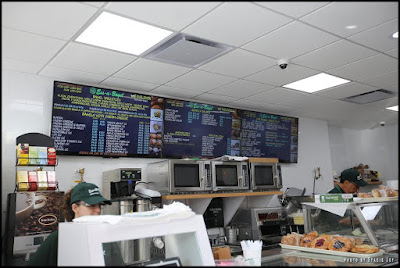 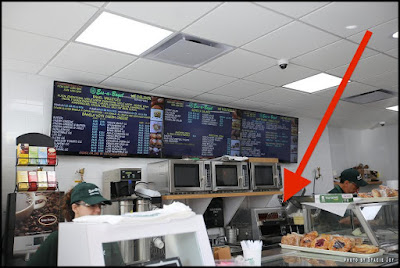 As the previous First Avenue location started to close down in March 2015, patrons started writing their goodbyes on the walls... the owners have preserved part of those walls here... 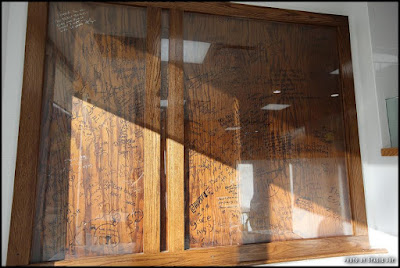 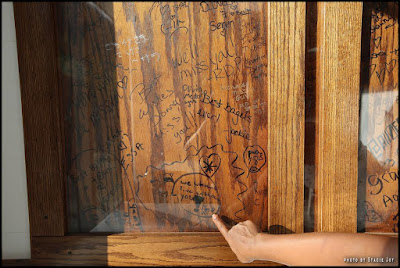 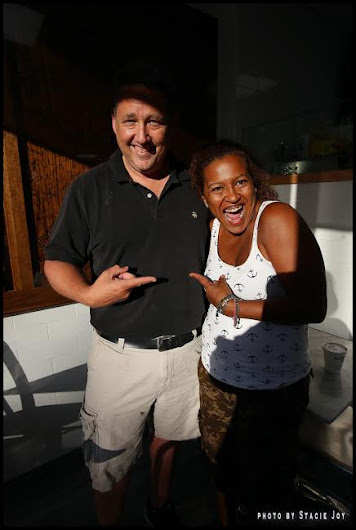 Charles Wenzelberg, one of the owners (pictured above with a longtime patron), offered a few more details, such as that Ess-A-Bagel will soon offer deliveries, add sidewalk seating and stay open a little later. (Their current hours are 6 a.m. to 9 p.m.) They will also expand their offerings to include pastries, cakes ... and bialys.

In an interview with Town & Village, Mike Wenzelberg (Charles' brother), talked about the numerous delays that kept Ess-A-Bagel from opening earlier this year.

A bigger problem was that a gas meter had to have a new line drawn from the gas main. Other issues were related to the size of the oven and necessary duct work, as well as a new air conditioning unit on the roof and making sure the noise from it didn’t disturb neighbors. “We don’t want these tenants to be angry with us,” said Wenzelberg.

Previously on EV Grieve:
New 1st Avenue Ess-A-Bagel will have a TOASTER
Posted by Grieve at 4:31 AM

Only one arrow for the toaster? Hmm, easy to see the disdain my favorite blogger feels for this offending amenity - no EV Grieve toaster love, or it would get at least three!

Best of luck to Ess A Bagel. Honorary members of the East Village. Great bagels.

Went there on Tuesday. As good as it's always been. The pumpernickel bagel there is so much better than at Tal's or Tompkins Sq

THE BAGELZ IZ BACK IN TOWN! JUST NOT THE SAME WITHOUT YOU! WELCOME BACK! MAZEL TOV!

YesYesYesYes.. welcome back... These are bagels you don't have to toast!

No knock on Tompkins who filled a void nicely but the best is finally back.

Isn't this OUTSIDE the border of the East Village? So why report it?

Unless you are quietly annexing this area in to the EV, you Putin-ski, you!

Really poorly designed. You'd think with all the money they make they'd spend a little bit on giving their guests a nice place to sit. It's like a 1970's Carvel with bagels. I guess it's just all about the bagels for them.

@5PM So how come every time there's a crime in StuyTown the police report the incident happened in Gramercy Park?

They ran out of onion bagels today. ONION! How do you run out of onion bagels? So I picked up a selection of other flavors and brought them home for taste testing. Toasted the garlic bagel, the aroma was amazing, however the garlic bagels (small) were a bit raw undercooked on the inside. The cinnamon raisin bagel (huge) was still warm, no toasting required to make the butter melt, and it was very good. The everything bagel (much smaller) was excellent,, and the coatings have the right mix of seeds and salt. They said they are already baking 1300 bagels a day. Judging from all the shape, size and bake variations in the batches, I'd say they still have some kinks to work out. Overall the bagels are better than Black Seed Bagels, and except for the garlic bagel were on par with Tal Bagels and Tompkins Square Bagels, and way better than the hockey pucks at Bagel Belly.

Stuy Town is not the EV. Sorry. No way. Not having it. If it makes people who live in Stuy Town feel better by saying they're part of the EV, fine. But as much as people here like to bitch and complain about the EV losing character, we can all take solace in the fact that we are NOTHING like Stuy Town. That's a piece of the suburbs dropped into NYC from outer space. And that whole stretch of shops running along 1st Ave from 15th to 21st bares strong resemblance to an LI strip mall. Great bagels aside, even the new Essa is completely devoid of character. All the shops look the same. Say what you want about the EV . We ain't nowhere near that far gone. And those shops are a reflection of the people who live there. So no, you are not an East Villager. More like Murray Hill South.

It's obvious they didn't spend much money on the interior of the store. It looks like a pop up health clinic, and the fluorescent light bouncing off the white walls makes it almost feel like a medical office. The old store had a nice warm feeling with the wood paneling, and it looked like a bagel store, unfortunately this one does not. Tal Bagels is much nicer, it even has a nice neon sign. Why didn't they at least try to make it look like the old store?

Relax about Stuy Town. Don't worry, residents know they don't live IN the E.V. However, as there is no retail in ST, they largely do their retailing in the East Village - which merchants know and love. And there is no correct label for Stuy Town other than that - but residents usually have to pick some other label (as ST is not recognized as a n'hood), so it's a tossup between saying "East Village" and "Gramercy."

Maybe over a nice bagel, you can find something else to obsess over!

EV/Stuy Town - whatever! Esse's back! Thank you! Puny Black Seed bagels just didn't do it for me. I'll walk the extra few blocks.