Schnitz has not been open lately on 1st Avenue 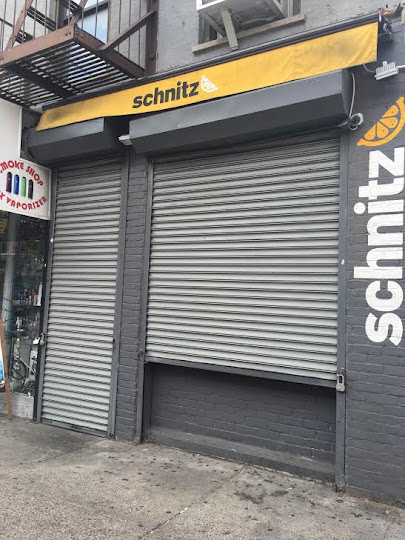 Several readers have noted that Schnitz has been closed all week at 177 First Ave. at 11th Street. The phone goes unanswered. There also isn't any note for patrons.

In the past, the Schnitzerz have left a note when their doors would be closed, like earlier in August... 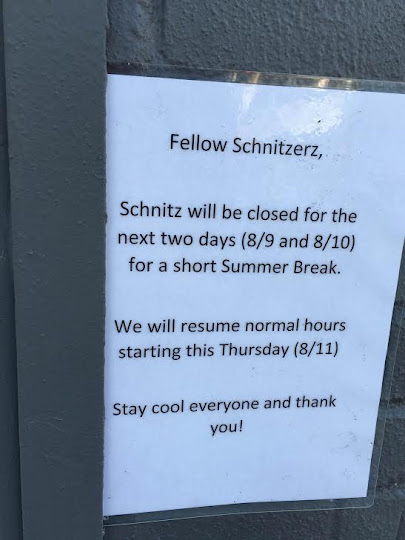 The space has also been on the rental market. According to the listing (PDF) at RKF, the asking rent is roughly $9,100 a month. (One local restaurant owner told us that he was offered the space last month for $8,500.)

No one from Schnitz responded to our email requests for comment.

Schnitz, which serves old-fashioned schnitzel sandwiches with unconventional toppings, opened here in March 2014. This was the first permanent retail space for Schnitz after gaining a following at Smorgasburg in Williamsburg and Dumbo.

The quick-serve sandwich market got a little crowded on the block in the past year or so ... with the arrival of Fuku and Black Seed bagels. In any event, we liked their food the few times that we tried it.

The space does have a small sidewalk cafe and beer/wine license.

Email ThisBlogThis!Share to TwitterShare to FacebookShare to Pinterest
Labels: Schnitz

So less than two years. At what point does the feasibility of opening a small business become... well, you know, unfeasible.

A transient residential neighborhood is now also a transient business neighborhood. Google maps, Yelp and all those supposedly "find it" apps will find it impossible to keep up the rapid changes and turnovers.

bring back something sweet
just dreaming

It's like startups in silicon valley. We are the silicon valley of restaurants. There will always be someone else who thinks they can strike it rich in the e.v. And some of them will. Schnitz seemed doomed. They never enticed me to try their sandwiches no matter how much I stared at their menu. Where they good? I'll never know...

I believe the German version of "Peelin' Potatoes" is Schälen von Kartoffeln.

I liked this place. Recently I ordered delivery from them and it never arrived. Tha was on Aug 23. They never reopened.

Oh no. I love this place but do reminisce about Something Sweet.

Bummer - loved this place. The Grumpy Russian was great.

Really liked this place, but not in the EV enough to go there more than once every month or two. Should have known it was closing when my last sandwich in late August was ivercooked.

Just realized *last night* that this place was closed. I am so oblivious.

For rent sign, big poster with the logo of the RE marketing firm.

So many empty storefronts. On Avenue C, I noticed at least one of them now has a broken window, too. Eventually, this *will* look like the 'bad old days'.

Landlords? Get your act together. This is ridiculous.