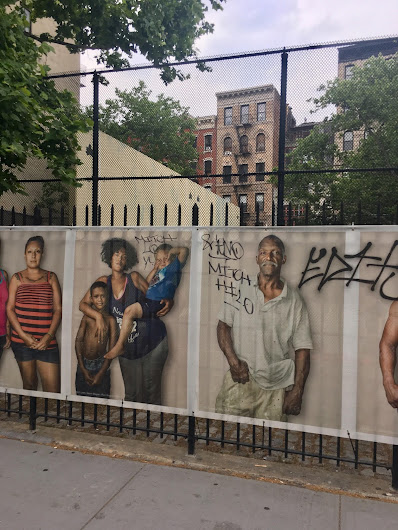 The Daily News reports that 52 out of 86 of the four-by-five-feet portraits in the Neighbors exhibit along East Houston Street have been tagged in recent weeks.

"I expected some vandalism though admittedly not on this scale," Mireles told the Daily News. He admitted that his "heart sinks" from the tagging.

"It’s not what I hoped for, but it’s part of this artistic experiment.

"I could have done this show in a gallery,” he added. "Being outside, the exhibit invites and allows engagement. As an artist, my goal is to provoke thought and jump-start conversations that lead to action. That my artwork is altered in service of stimulating dialogue is a small price to pay."

And of the 52 tagged portraits, only one of them features a red penis... 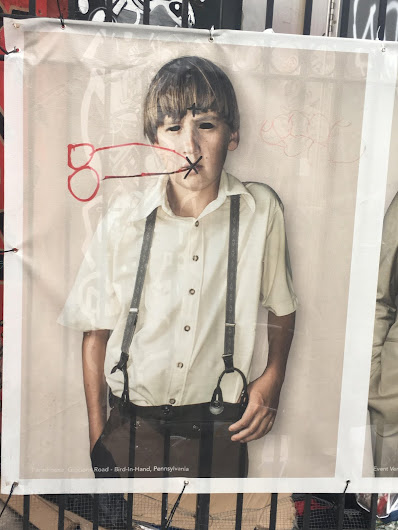 Wish the city would crack down hard on tagging. It gets worse by the week it seems. Particularly in the East Village. Probably too much to ask from De Blasio since it's a quality of life issue.

what is wrong with you colonizers! Graf is a real artist expression! Not vandalism!

If the graffiti was done at 5Pointz, would the tags be considered "art"???

Those tags serve a very important function. They let all of the other taggers know which of them is the biggest pile of steaming human excrement who doesn't care one bit about real art or making the neighborood look better. No, they just care about seeing their meaningless ugly little tags everywhere, because that is the only way they will ever be noticed by anyone.

I assume this pieces are not originals but prints which of course can be reprinted. Although I am not a fan of someone tagging permanent public art I have no problem in this case. Artists should understand the neighborhood they have chosen to grace with their artwork and it is no secret most things get tagged in the LES.

Just because things do get tagged doesn't mean they should! Cmarty is exactly right. This type of tagging is the worst kind. I love street art and think are tons of good examples (see avenue B between 2nd and 3rd for multiple examples) and some forms of graffiti are fine to (see the tops of buildings on Houston). This shit is literally just shit.

"graf" is not art or freedom of expression unless it's organized as such. Otherwise it's pure vandalism.

Realize that that unartful taggin' has actually been a big selling point for realtors assisting in gentrifying towns for the past decade and a half. Ghetto chic.