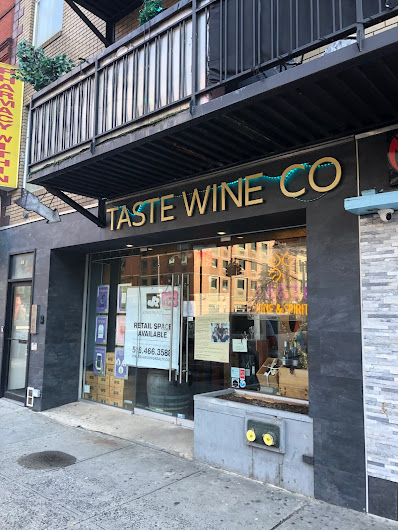 You've likely noticed the for rent sign hanging at Taste Wine on Third Avenue between 10th Street and 11th Street.

It went up in early March ... followed shortly by another sign — a heartfelt letter from owner Gary Landsman that details his family's fundraising efforts to help find a treatment for the fatal genetic disease that his two young sons have. 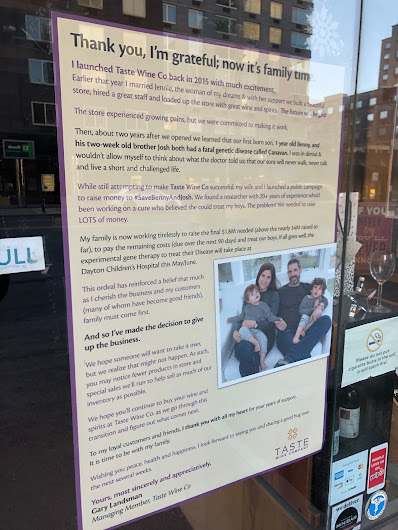 I launched Taste Wine Co back in 2015 with much excitement.

Earlier that year I married Jennie, the woman of my dreams & with her support we built a beautiful store, hired a great staff and loaded up the store with great wine and spirits. The future was bright!

The store experienced growing pains, but we were committed to making it work.

Then, about two years after we opened we learned that our first born son, 1 year old Benny, and his two-week old brother Josh both had a fatal genetic disease called Canavan. I was in denial & wouldn’t allow myself to think about what the doctor told us; that our sons will never walk, never talk and live a short and challenged life.

While still attempting to make Taste Wine Co successful, my wife and I launched a public campaign to raise money to #SaveBennyAndJosh. We found a researcher with 20+ years of experience who’d been working on a cure who believed she could treat my boys. The problem? We needed to raise LOTS of money.

My family is now working tirelessly to raise the final $1.8M needed (above the nearly $4M raised so far), to pay the remaining costs (due over the next 90 days) and treat our boys. If all goes well, the experimental gene therapy to treat their Disease will take place at Dayton Children’s Hospital this May/June.

This ordeal has reinforced a belief that much as I cherish the business and my customers (many of whom have become good friends), family must come first.

And so I’ve made the decision to give up the business.
We hope someone will want to take it over, but we realize that might not happen. As such, you may notice fewer products in store and special sales we’ll run to help sell as much of our inventory as possible.

We hope you’ll continue to buy your wine and spirits at Taste Wine Co. as we go through this transition and figure out what comes next.

To my loyal customers and friends, I thank you with all my heart for your years of support. It is time to be with my family. Wishing you peace, health and happiness.

Yours, most sincerely and appreciatively,
Gary Landsman

Landsman's time with the shop is winding down this week, and there are sales: 20-percent off all bottles of wine (minimum three-bottle purchase) and 10-percent off spirits. Hours: Noon to 6 p.m. today through Friday.

Landsman told me that he remains hopeful that he can sell the business before taking the family to Dayton Children's Hospital in Ohio later this spring. (If he can't find a buyer, then he'll be forced to closed.)

"There are three parties that seem serious about purchasing the store, and keeping things going, which our customers have let us know they would love to see happen," he said. "After [this] week, I'll likely come in a bit to try and close things out, but my goals at this point are to sell everything we have left in stock and consummate a deal with one of the prospective buyers."

You can read more about the campaign to save Benny and Josh — as well as others with Canavan — at this link.
Posted by Grieve at 6:00 AM

Hard to fathom what this family are going through. To raise this much money is an amazing feat, I truly wish them the well.

What an incredible story. He sounds like a wonderful man with an enormous heart who is facing quite a bit of hardship and uncertainty. I commend him for making the touch decision to close up shop and allocate his time/resources towards his children. While I regret having not patronized the wine shop yet, I still wish him and his wife the very best, and envisioning his family will come through the other side.

Super story filled with challenges and hope. I wish Landsman and his family the best !!
Its crazy that they raised so much money and the Dr, hospital still wants more.

Mr. Landsman has his priorities right, which is a rare thing to see these days. He will never regret having prioritized his family & the search for treatment for his sons.

He's a mensch, and I wish his family all the best in getting the most effective treatment for his sons. I also wish the best to the whole family as they go forward together. To create and sustain such a loving family is, as the kids say, "goals".

This got me right in the kishkas. I donated. I pray those gorgeous boys will get well.

This is an incredibly moving story. I wish Landsman and his family all the best.