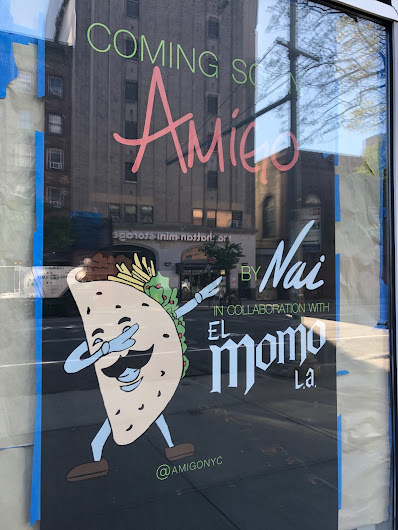 Signage is up now for Amigo at 29 Second Ave. between First Street and Second Street...

There's only a hint of what's to come to the space. This is a collaboration between Chef Ruben Rodriguez of Nai Tapas at 85 Second Ave. and Juan “Billy” Acosta, whose family runs the much-ballyhooed Carnitas El Momo in the Boyle Heights neighborhood of Los Angeles.

Romulo “Momo” Acosta learned the art of exceptional carnitas from his father, a farmer and carnitero from Salamanca, a town about 200 miles northwest of Mexico City in the state of Guanajuato. Acosta moved to Southern California and began selling carnitas on weekends in the mid-1970s as a side gig from his job as a welder. His porcine mastery didn’t become a citywide phenomenon until his children, including his daughter, Adriana Acosta, and son, Juan “Billy” Acosta, mobilized the family business with a food truck, and occasionally street stands, beginning in 2013.

Anyway, Rodriguez and Billy met and decided to team up for what L.A. Taco says will be "arguably the best carnitas you will ever find in the U.S."

And what to expect here? Back to L.A. Taco:

An elevated taqueria without “the stereotypes” with a nice bar is the idea. The menu is going to be composed of what Carnitas El Momo is known for “because what he does is beautiful,” according to Rodriguez. He’ll be adding an oxtail taco and a smoked trout taco to the menu and they will both be collaborating on some menu items together, but that’s still to be determined.

It’s no secret that El Momo’s recipe and technique are a highly sought after treasure and when asked about it, Rodriguez answers: “It’s a very emotional thing, especially when we are talking about our food. This is how we relate to emotions, our family, our past. So I wanted to make sure he felt comfortable. [Billy] as well did his part for me to feel comfortable.”

“I will be going out there for the beginning and get it rolling” Billy explains. “I’ll be bringing a few of my crew mates to ensure the same quality and eventually I’ll be leaving a full staff running it.” The plan is to have the family’s trusted nephew, Ricardo Sandov, who has worked his way up over the years, to man the taqueria.

Amigo is hoping for a July opening date in the space that was previously home to Neapolitan Express.

Well that's something to look forward to; I'm already salivating in anticipation...

I miss tacos in this area since Oaxaca closed down in Extra Place Alley.

This is awesome news -- bring on the tacos!!

I dislike LA (my hometown) but I will say, the food there is generally very good. If this carnitas is highly rated there, I will have to try it.