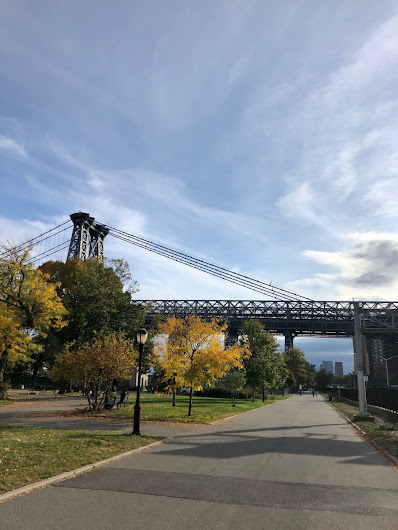 Here are the latest updates about the $1.45 billion storm protection project for East River Park:

- The start of construction, which had been slated to commence this fall, will be delayed until the spring of 2021, according to a presentation the city made at a CB3 committee meeting last month. For further reading: BoweryBoogie and Bedford & Bowery.

- The DOT will propose permanent protected bike lanes on Avenue C and East Houston Street to offset the closure of the East River Park greenway once construction starts.

As Streetsblog first reported: "The lanes will run on Houston from Second Avenue to the waterfront and on Avenue C from Houston north to 20th Street, enabling cyclists traveling from below Houston on the existing bike lanes on Pike and Allen streets to connect with the bike network further north."

CB3's Transportation, Public Safety, & Environment Committee will hear the proposal on Tuesday at 6:30 p.m. The Zoom info is here.

Endorsing a proposal put forth by the Lower East Side Preservation Initiative, CB3 voted to recommend that the buildings, adorned with unique maritime terra cotta decorations, be raised to the Park's new grade level and renovated rather than demolished, thereby protecting them from future rising tides.
The CB3 resolution calls for amending the plans of the City's controversial East Side Coastal Resiliency Project. Those plans call for the demolition of the two structures and their replacement with standardized modern structures of the kind planned for parks all over New York City.

Just close the FDR and fill it with dirt, problem solved. Then what is really needed is widening of the path by ConEd where it is comically and dangerously narrow.

Yes, because a bike lane on Avenue C is a *more* than suitable replacement for getting to ride on a wide, car-free expanse flanked on one side by a river, and on the other by old trees, bushes and flowers. Sure, uh huh.

Build a roof over the FDR to act as a sea wall. This would still cost a pile of contractor money, keep the sacred traffic artery and create a barrier without destroying the park.

It would work as well as the current proposal regarding flooding. Which is to say not very if at all.

Of course the FDR would need to be closed nights on and off for a couple of years and CIVILIZATION MIGHT END if we inconvenience night time Uber drivers.

We don’t need the FDR drive. Close it down. Paris did it overnight and gained clean air and access to the river. The Passenger Car only road is not an essential part of traffic management in the city. It benefits the few privileged at the expense of the many unprivileged. This whole plan is designed to maintain the FDR drive. That’s why it’s boundaries are the section where the road is on ground level and not elevated. Once the road elevates suddenly there is no need for flood protection.

Why would they do that on C instead of D? The bike lanes are annoying, they did that to Grand Street in BK and it's so ridiculous. The city needs to keep it moving, vehicles need to be able to pull over and park etc, otherwise shit just gets blocked etc. Shared bike lanes are good on side streets but inefficient when they take up so much space on main roads. Regardless, Save East River Park!

I agree, but as the saying goes "politics is the art of the possible" (Bismark). The political will to close the FDR is unimaginable. Bloomberg had the most weight of any Mayor in recent history and he couldn't even get ConEd to cooperate on an East River bike path.

Robert Moses cursed Manhattan by ringing the island in highways. In his defense "cars are all good" was the general consensus in his era.

Riding on Avenue C sucks since people are always parking in the lane, and it gets even more dangerous closer to Houston.

It's also a very heavily used bike lane, maybe since Avenue B is so narrow.

A protected bike lane is needed on Avenue C regardless of the status of the ER path.

I wish the City would use some common sense and cancel this entire worthless project. The City with is current 8 billion dollar deficit due to the Covid 19 pandemic cannot afford the 1.45 Billion dollar price tag for this project which I am sure will end up costing more with the usual cost overruns. I am also speaking from the heart with my comment as I am a City employee and have been hit with a 5 day furlough (thank you Mr. Mayor) which is really hitting me hard in my wallet.

Absolutely right. The bike lanes on C could use protection regardless.

Floods are coming. Delay increases risk. Rip the band-aid off and just build it already.

Historically, critical infrastructure projects in NY are not subject to short-term financial position. We all want to ride our bikes and enjoy ERP, but NYC has been woefully lacking in implementing meaningful post-Sandy safeguards. Delaying this project will not end well.

You folks do realize when Moses built the roads the docks were filthy busy places of commerce, not places for the bourgoise to idol. Fifth Ave is the success it is because it was farthest from the rivers, that stunk. And not everyone agrees with the bicycle ideology.

The current plan is terrible. No interim flood protection. Will add to pollution and carbon emissions. Will heavily impact the health and well being of area residents for years. Will destroy hundreds of mature trees and biodiversity. Will cut off access to green space during an ACTIVE pandemic. For what basically will be a wall that will have to be rebuilt anyway once the sea-level rises again.