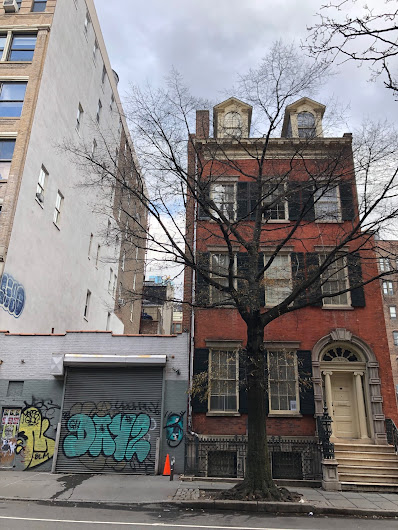 The landmarked Merchant's House Museum is sounding the alarm again — this time over yet another new proposed development for the lot next door on Fourth Street between the Bowery and Lafayette.
Here are more details via the Merchant’s House website:

As if 2020 wasn't difficult enough for our dear Merchant's House, the developer filed an application in early December for a new building next door at 27 East 4th Street, one that is taller and more massive than the original proposed hotel!
Irreversible damage from the construction is guaranteed and the risk of collapse of our fragile 189-year-old landmark building is even higher.
For the third time, on December 17, Community Board 2 voted unanimously to REJECT the developer's latest application.

The application now goes before the Landmarks Preservation Commission next Tuesday. (The website has details on how you can take part in the LPC meeting.)
Here is some background about this ongoing project: The development firm Kalodop II Park Corp. has been trying to build a hotel adjacent to the Merchant’s House Museum for nearly 10 years.
In January 2019, the developers sued New York City, the City Council and Councilmember Carlina Rivera over the rejection of their Uniform Land Use Review Procedure (ULURP) application for the project.

The Real Deal first reported on the suit:

Kalodop's lawsuit ... asks the court to reverse the City Council's disapproval and enter a judgement approving its ULURP application. It argues that the Landmarks Preservation Commission and the City Planning Commission had already approved their project and attributes community anxiety to "a grass roots campaign of fear and misinformation" from the Merchant's House Museum that "spurred local community members and representatives into action with a false narrative that any construction at the property would cause the Merchant's House to be catastrophically damaged."

The lawsuit is still pending, which, as the Merchant's House points out, means that the developer currently has two open applications for construction on the same lot.
The developers were seeking a spot rezoning to build an 8-story hotel on the site — higher than the current zoning allowed. The full City Council ultimately voted down the rezoning in September 2019.
Preservationists, not to mention the leadership of Merchant's House, the circa-1832 building, were concerned that the construction could permanently damage the structure, one of only six residences in NYC that is both an exterior and an interior landmark. Aside from Rivera, Sen. Brad Hoylman, Borough President Gale Brewer, Assemblymember Deborah Glick and Community Board 2 were also opposed to the current application for the 8-story hotel.
The developers have promised to take extensive measures to ensure that the neighboring structure would not be harmed during the hotel construction.
This project dates to 2011. After several hearings through the years (here and here, as examples), the Landmarks Preservation Commission eventually signed off on the project (in 2014) as did the City Planning Commission (August 2018).
The developers can still build a six-story building on the site even without the rezoning. (They also own the lot around the corner at 403 Lafayette St., which the Merchant's House has suggested would make a better spot for the hotel.)
The proposed site of the hotel, 27 E. Fourth St., currently houses Al-Amin Food Inc., which houses carts for street vendors.
More history of the Merchant's House: "Built in 1832 and home to a prosperous merchant family, the Tredwells, and their Irish servants for almost 100 years, it remains complete with the family’s original furnishings, household objects, clothing, and personal memorabilia."
The Museum is currently open by appointment.
Posted by Grieve at 5:00 AM

I've been following this issue and attending the meetings regarding the development. The proposed construction will damage the Merchants House without a doubt. There is NO reason for a hotel in that particular lot and the developer could easily take their plans elsewhere but they are bent on pushing unnecessary rezoning and development in a place where it will have an extreme negative impact. The Merchant House is not just a neighborhood or city treasure, but is a NATIONAL landmark and is irreplaceable. Please help out and submit feedback to the LPC by this Friday. Community input can be powerful.

There is no need for a hotel in Manhattan now or in the next 10 years. The covid junta isn't going anywhere until they've sucked the last cent of debt out of the country.

No need for another hotel but why not build an apartment building (or literally anything) on the empty lot next door?

Why not leave the existing food cart storage building in place? But THAT would be logical.

@9:34 - the lot in question is currently occupied by a building where food carts are kept at night. The open lot on the est side of the museum cannot be built on and will become a city park of some kind.

The property where the developer wants to build is very small and it would be impossible to do any kind of construction without affecting the two neighboring buildings.

"...after several hearings through the years...the Landmarks Preservation Commission eventually signed off on the project" - well gee, whoda thunk it?!?

THE most useless group in all of NYC government.

Seems like the contractor would be required to brace the left side(and maybe the right side as well) of the the Merchant House to prevent any damages before proceeding with the hotel build. Pretty standard procedure. However I don't understand how the hotel could be built without enclosing the windows of the building with the white wall on the adjacent lot which would normally need a 5 foot clearance.

Given the demise of NYC retail and restaurants recently,and the depression of its overall economy, it's surprising the amount of real estate development happening, mostly in high end properties and now another hotel blocks from the Bowery. Getting rid of the working poor considering them being locked out of their jobs by the mayor and governor has one wondering if Bloomberg's dream of NYC becoming the worlds largest gated community can be far behind.

XTC, lot line windows aren't allowed. Obviously, they were installed, but, if that is the property line, they will just lose them.

And what about its twin building adjacent on the east.... oh, right, the City let that treasure get demolished, as many of us folks remember.

@9:58 - thank you for reminding me of that building as I had forgotten. Yes, that was a despicable act!

Let's not forget the Bottom Line Club that was 2 blocks west on 4th St. Not a historic landmark as such but opened a year after CBGBs and was home to some incredible shows by Lou Reed, Patti Smith and many others. Also marked the debut of an unknown guy by the name of Bruce Springsteen. Ten shows later and he was on the cover of Newsweek and Time.